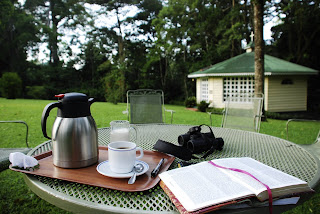 The retreat in Rondo was incredible! I had considered doing all kinds of activities but went back to the question, "Why am I taking the management team on a retreat?" It was for us to get to know one another. And so we ended up just having fun. We arrived before lunch on Sunday. I told everyone that they could choose if they'd like to go on an afternoon hike after lunch. Two of the guys decided to stay behind and rest, but the other two gave them a hard time about it, so we all ended up hiking for about almost three hours. We saw lots of monkeys (black and white colobus monkeys, blue monkeys, and red tail monkeys), tons of butterflies, even a donkey. (OK, the donkey was on its way home through the forest. But it was the biggest animal we saw.) Oh, and lots of ants, too. Cocktail ants (small ants that are poisonous) and safari ants (bigger ones that are very aggressive). We had a guide that told us about the different plants, which ones have medicinal value, how the olive baboons use some trees to communicate by using it as a drum, how certain fungi can help improve your memory... We really had a great time of laughing and relaxing despite the tough hike. Stopped about halfway. I had packed some cold soda for everyone, so we took a break and were refreshed.

Once we were back at the retreat center, we sat in the garden and prayed for one another, for the staff, and for ELI. It was a really neat time of ministry. After a really nice dinner, we headed back to our home for Jenga and Uno. I had printed a pack of questions, so everytime someone tossed a bean bag at you, you first had to draw a question, answer it, then jenga (build). (You could also choose to answer a question someone had drawn earlier.) If you let the tower fall, you had to answer a "Truth or Dare" question. We had a ton of fun! After that, we played Uno till the time that the solar power was turned off, and everyone headed to their rooms. I went to walk in the garden for a bit, just to appreciate the stars so deep in the forest. It's really breathtakingly beautiful!

I was the first one up and out of the door on Monday. The Kenyans really appreciated the opportunity to sleep in! I watched the sun rise, spent time doing my devotions in the garden, (hence the picture above) and once the gate into the forest was unlocked, I went to sit in the forest for a while, watching easily 100 red tail monkeys forage for food in the branches high above my head. One came down very close to me to come and pick up seeds from the ground... (They bury these seeds in one spot and let them rot a bit before eating them!)

After breakfast, everyone took time for devotions, where after we had a time of sharing. Many said how thankful they were to be able to get to know each other on a different level than they had ever known one another. Everyone wants to go back soon! (That won't be possible. It's very pricey!) I'd be happy to take them for day trips. Just can't sleep over as a group... :)

Had lunch in town, and then we all headed back to Kipkaren.

It was cool to run into some of the team on our grounds today, being able to relate on a level we've not related before. It was a good, good thing to go away with the team!

Tomorrow afternoon, I'll be heading back to Ilula.

Click here to see more photos of the time in the forest.
Posted by Adele around 2:32 AM