If your phone, power and water all work at the same time...

... you're probaly not be in Ilula. A good friend used to say that of Malawi, where she was a missionary. It's more and more true of this neck of the woods.

We've had a lot of issues with water recently. I have to remember to turn on the water before getting soap on my hands. Or test the shower before getting ready to get clean. But even if you do so, often times, when you're halfway through a shower, the water would just stop. Just like that.

Similarly, we've been having a number of power outages recently. I am not sure how things work at home, but out here, the fuses in the huge transformers seem to blow every so often, as it did today. By the time I got to Ilula, power had been out all morning. Kenya Power didn't know of the problem. They came out to fix the fuse 5 hours later. I'm thankful indeed that they did come to fix it. As Westerners, we're pretty dependent on power. (I am, at least. My computer battery only lasts that long. And the stuff in your fridge gets bad after the power is off for some time.)

On a different note: Today, before I left Kipkaren to return to Ilula, I stopped by the school to take some pictures. A first-grader was crying really hard out on the playground. I went to check on her and found that little Viola had a terrible sore on her toe. Puss was oozing out... I was trying hard not to look grossed out by it. I could never be nurse! I did take her to the clinic, though, where they took good care of her.

Back in Ilula, I visited with the kids for a few hours this evening. Like they often do, the kids had a million questions about everything under the sun, from Osama to earthquakes! They also got to sing "Happy birthday" to my brother Henk. The kids were laughing hard at me speaking Afrikaans on the phone to him. Henk is 42 today. This is a photo of the mountains in the town where he and his family live. (This is where Henk works.) South Africa's been exceptionally cold recently. Places that rarely ever get snow, got snow. 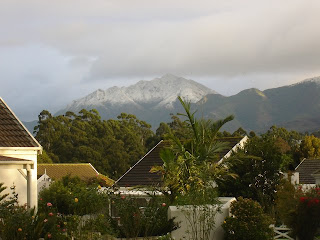 So, happy birthday again, Henk. Hope you have a wonderful year!

On that note, I'm off to bed. Lots to get done in the office tomorrow.
Posted by Adele around 12:48 AM