On digging out sand flea egg sacks . . . and almost being robbed!

The day started full of promise! A great time with God. Wonderful breakfast with a good friend. And then we headed out to see our little friends down the road. Armed with Dettol, needles, Triple Anti-bacterial ointment, soap, and a huge portion of courage, my friends and I headed out to see what we can do to help the little ones.

As I rounded the corner into their maize (corn) field, little Jepkemboi came running and through her arms around me. It melted my heart! This is the same little one whom I could hardly get to smile last week! 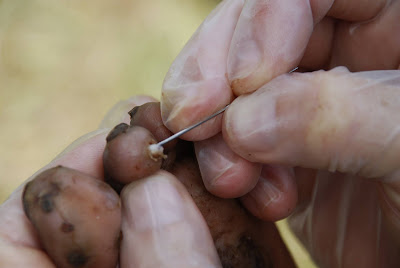 Laura, Mary, Ruth and I settled in for the task before us. Laura had my camera, so she was able to take some photos of the process. (You can see some of the pictures on my Flickr page.) We had only removed 13 egg sacks from the little ones' hands and feet when I couldn't deal with it any more. The kids were in a lot of pain!

Tomorrow, I'll be taking them to a pediatrician who will refer us to a surgeon. The pediatrician said they'd be able to remove them surgically (with local anesthesia). I counted and estimate that each of the three youngest kids have between 80 and 90 lesions! And even while we were sitting there, we killed at least five or so sand fleas (jiggers) that were trying to dig into the little ones' skins. These fleas are very, very small. There's a picture on Flickr of one of them on Kiprop's hand.

I've been careful, using gloves the whole time. However, it would be easy for one of those fleas to dig into your skin even while you're just sitting there, working. Something has to be done about the fleas in the garden and in the house.

So, after dropping off Laura at the airport, I went to the Agro-Vet store to buy poison to spray in the yard. Since I hadn't had time to burn a DVD for Laura with pictures of her time in Kenya, I took my computer to the airport with me. And though I never leave it in the car, I decided to leave my computer bag while I run into the bakery to buy bread. After all, you couldn't see the bag under the bag with poison.

Or so I thought.

After getting bread, I stopped at a street vendor to buy another pair of shoes for the kids. But the guy gave me a ridiculous price when I asked about a pair of used kids' shoes, so I wasn't even going to barter! I just laughed, turned away, and started walking to my car.

My car's higher than the average vehicle on the street, and when I looked down the road to where it was parked, I saw a man getting out of my car . . . with my computer bag in his hands!
The car was parked at least a good 50 meters (around 50 yards) from where I was right then, and I yelled, "NOOOOO!!!!" as I dashed down the road.

EVERYONE stared. Even the guy. He dropped my computer like it was about to explode and ran for his life. Literally. (In Kenya, mob justice is still practiced, and it's acceptable. If he ran with my bag, he'd be slowed down. If other guys caught him, they could literally stone him or kill him with sticks!)

In the few seconds it took me to get to my car, a crowd had gathered, asking if I'm OK, if the guy had gotten away with anything, if I had left the car open.

I was pretty shaken up, not sure for a moment if I was safe even in the crowd... "I'm OK. He didn't get anything. He busted the door lock." As I drove off, still shaking, people were staring. Some were saying how sorry they were. One guy said, "Praise God he didn't take anything." Praise Him indeed!

The corner of my computer is busted from being dropped from about 3 feet high, but it works fine. Nothing broke. Except for the lock to my car. The guy must've busted it with a screw driver.

Until I can get the lock replaced, I'd have to unlock the driver's door from the passenger side. But think about it: If the guy had busted the passenger lock (the side where the bag was, after all), I would not have seen him get out of my car! He'd have been protected by the vehicle itself!

So, as I head to bed tonight, it's with such a mixture of feelings.

Hope for our little friends down the road.

Relief that my computer didn't get stolen.

Frustration that my car door is busted.

Joy for having had friends around for the past two weeks (first Karen, then Laura).

Sadness for being back to a place where much of my journey is walked alone.

But the journey does continue. For now, Flannel simply has to endure listening to my stories.

To read more about tungiasis, the condition my little neighbors have, visit this site.