The Surgeon's Toes, and other highlights of my day 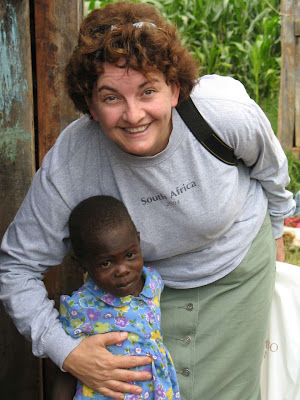 Nancy Jepkemboi and I (photo taken on Tuesday by Laura)
We finally got permission from Silas (the dad of the kids down the road) to take his children to see a doctor and spray his house and yard with insecticide to kill the rest of the jiggers. The kids came to our center early in the morning so the spraying could begin without them being exposed to the poison. Plus, I wanted to be sure that they were nice and clean before taking them to see the pediatrician. But before they came, their dad made sure they were cleaned up. He's coming around, I'm telling you!

Their wounds needed to be cleaned, however, so we got a couple of basins with warm water and Dettol (antiseptic), and soaked their little feet in it. One by one, Ruth, the interns and I scrubbed their little feet. Mud is caked into the holes in their feet, and we literally had to scrub it out with a nail brush. It hurt me to do it, but it didn't hurt them. Not for the most part, at least. We embalmed their feet, if you will, in Triple Antiseptic ointment, put on their dirty little socks, and got ready to load up the car.

The urine running down (Brian) Kiprono's leg as we were finishing up should've given me a clue that the kid's not really potty trained, but what can you do? I asked (Joanna) Jemutai to hold her little brother on her lap while we rode to town, but no sooner had we left our compound, or he was on the seat. Good thing I have removable seatcovers.

First, we picked up Anne Chebii, a colleague who works in our town office. I realized I'd need another pair of hands. Anne and I then took the kids to the pediatrician, where we waited for about an hour before he could see us. He suggested that we see a surgeon, but prescribed antibiotics for the three youngest ones, plus medicine for Joanna's fungal infection on her face. He charged me only for one consultation rather than four, which was nice!

Off to the surgeon's office, just a few doors down. Here we waited for another two hours for the surgeon to arrive. Since there was a cafeteria downstairs, I took the kids to lunch. We ordered ugali and chicken (there was no beef, which would've been easier for them to eat), and I got them all a bottle of soda, too. They beamed at the sight of the food! I soon realized, however, that it would be a total mess to stay at the table. These kids had probably never eaten at a table. We moved outside and sat on the grass, and boy, were they happy. They gobbled down the food like it's their last meal, cleaning every single plate so only the bare bones remained. As they stood washing their hands, I saw a huge puddle form at Richard Kiprono's feet. Now, his sweat pants were drenched in urine, as were his cute little Bubblegummer shoes. Off with the pants, it was!

Back at the surgeon's office, the man was surprised that we had been sent to him. "It would take me at least four hours to remove these jiggers," he explained to me, "and in four hours, I can do several major surgeries which I'd charge 150,000KES for each (more than $2,000). It's not the right thing to remove these surgically. What you have to do is simply spend an hour a day digging out the egg sacks..."

He explained that he himself had a worse case of jiggers when he was a kid, and proceeded to take off his shoes and socks to show me how deformed his toe nails were as a result. I know, totally bizarre! The point is, though, that he had empathy, but couldn't help us. He told me that he'd read up more about specific medications that would help. He asked me to bring in copies of the articles I had found, and commented that these truly were the worst cases he has seen since his childhood. "Eldoret doesn't have jiggers," he explained. "It concerns me that these children look so bad. I might have to contact the government to go and spray the entire area in order to contain this disease."

Point is, I'm not exaggerating when I tell you that these kids are in bad shape.

Little Richard fell asleep on my lap while the surgeon and I talked about the options before us. And as the doctor talked about various topical anesthetics I might be able to use to make the removal process less painful, I felt how my lap became a warmer and warmer from the little one urinating on my lap. I tried to focus on what the doctor was saying without letting him read my mind. Thoughts flashing through my mind included, "I hope the urine stays just on my skirt. I wouldn't want to get up and leave a wet seat behind. I'm glad I'm wearing a thick denim skirt - it's soaking up more urine than a cotton one would've. What did he just say about which medicine might work??"

I asked about tetanus shots, and he referred us to the third stop for the day: ER. There, a friendly nurse gave each kid their shot. The three youngest ones took things in stride. They cried when the needle went in, but the tears stopped almost immediately. Joanna, however, put up the biggest fuss I'd ever seen. She was paranoid of a needle, and two nurses and I ended up having to hold her down! I never thought I'd ever do anything like that! But the moment the needle came out, she was all smiles. She remembered that I had told them I'd buy them each a candy if they'd endure the shots!

The last stop for the day was to get their heads shaved to prevent any diseases on their heads, and the kids looked really cute with their clean-cut little heads! They were beaming when I dropped them off at their home with some fruit to take with them.

Thank you to each one of you who have expressed care for these precious little ones. The journey ahead is still long, but they're already doing much better than when they first walked into our lives 11 days ago.

Once they're healthy and their home is jigger-free, we'll talk about options in terms of hiring someone to help at their home every day and to take care for the two boys so the two girls can go to school. But these are issues for which I'll seek insight from my Kenyan directors. I want to do what's best for the children, but also what's best for the dad. I don't want to enable him and make him dependent on us. Instead, I want to find ways to empower him to be a better father.

Some sights I don't want to forget:
In about 2 weeks' time, a team will come to do a VBS. These kids will be invited to join. Will you please pray that God will prepare their hearts so they can know how much Jesus loves them? I've been praying lots for them, including soaking them in prayer as I wash them and treat their wounds. I have no doubt that God will heal their little bodies, but even more so, that he'll heal their hearts.
Posted by Adele around 1:15 AM