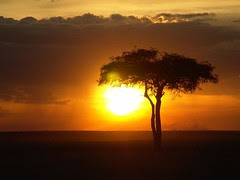 Sunset
Originally uploaded by Boyznberry.
When you have a whirlwind experience in a foreign country, serving outside of your comfort zone, it's easy for much of the experience to get lost unless you take some time to think through what you did, how you can improve the next time (should there be a next time), and basically ask the question, "As a result of what I've experienced, what does God want me to do?" (Check out http://docfitzgerald.blogspot.com/ for news on their time in Ilula and Kipkaren.)

And so, after teams serve with us, I always encourage them to take two days to debrief. And since they're in Kenya, what better way to do it than in the African bush! I don't usually get to go with teams, but this particular team invited me to join them for debriefing/safari. We went to a camp I had never been to: Ilkeliani. It's on the far western side of the Maasai Mara. Not only was I thrilled to join them, but since I've been sending most teams to Ilkeliani this summer, I was excited to see this tented camp.

On Thursday afternoon, as we boarded our little puddle jumper from Wilson Airport in Nairobi, the copilot seat was empty. I asked the pilot, "Would it be OK for me to join you?"

"No problem! Just climb over," he said with a smile. He didn't have a second pair of earphones there, so I couldn't listen to the communications with the air traffic control, but was able to visit with him throughout the flight, learning about much of the equipment. We had a blast!

Seeing the Great Rift Valley from the copilot seat was just the beginning of many fun adventures!

Our Maasai Warrior
A Maasai warrior walked up to us as we got off the plane, and as he started talking, I knew it was going to be a challenge... The way he talked (especially his voice infliction) was 100% that of Frank (Fraaaank) in Father of the Bride, except, you could hardly understand a word! His name is Petrol (Petro, actually, but he introduced himself as "My name's Petrol. Easy word. Like gas!")

I ended up being the translator, translating everything he said to understandable English. DeAnn and I chatted about our guide and what we could do... We decided we would make it so much fun and encourage him so that he would actually enjoy the trip. (It really seemed like he had lost his joy for what he was doing!) Either way, it became a fun challenge!

Leopard!
On our first drive (even before heading to our camp), we came upon one of the most amazing sights: A leopard sleeping up in a tree! (Check out the photos!) We spent the longest time waiting for him to perhaps get out, but he didn't... Nevertheless, we had a blast taking pictures!

At the camp we dropped our few things in our tents (which are right on a river) and headed to the camp fire, where we visited about the experiences of the day, but also of the past few days. The team was TRULY amazing.

Laying in bed, I was dead tired yet too excited to go to sleep. (Going on safari never, ever bores me! And I've been going on safaris ever since I've been a kid!) My roommate and I made ourselves comfortable on the lounge chairs outside our tent and visited a very long time about life, about God, about who God is and who we are and are not, all while listening to hyenas laughing not too far away...

Day 2: Can it get any better?
We were up soon after the sun rose and headed out on our morning game drive. First thing we saw was a mama lioness and her cubs, having breakfast. Then the two male lions. Our car died right as we were sitting watching the lions. The battery was dead, and there was no way we could get out to push! So we waved down the next vehicle that passed by and he pushed us (the benefit of driving Land Rovers: He could push our vehicle with his since we had the spare tires on the back.) We briefly saw a cheetah, and of course tons of other game. Headed back to the camp for brunch, after which I spent time working.

Our afternoon game drive was spectacular! We had a different vehicle (since they didn't want us stuck again!) and in the process got company--a couple who are with the Rafiki ministry and were visiting Kenya for the first time. We didn't come across a single other vehicle, we were in such a remote part of the park. Saw a herd of 34 elephants, among others, and were able to photograph the most amazing sunset!

I went to sit in the front seat next to Petro, and we had a blast of a time. In fact, I think he actually enjoyed the ride, and especially the bit of competition going on... He'd challenge me to see if I could spot elephants that were kilometers away, and I'd do the same to him.

He reluctantly drove straight ahead, obviously expecting to find nothing, yet finding the two magnificent birds right where I said they were... This sealed the deal for him, I think. We had a blast!

One of the many highlights was to be able to photograph the most amazing sunset with an acasia tree right in front of the sun! Yet another amazing day in paradise...

Day 3: WOW!
We were woken up at the crack of dawn: 5:30. Time to gather our stuff, watch the sunrise turn the big sky pink, and head out for another amazing day! This time there wasn't space for me to sit up front (our picnic breakfast cooler was in the front seat and other floor space taken by our luggage) so I sat in the back row. While quickly changing seats with Lori so she could get a better shots of the lions' blood-smeared faces, my wonderful little super binoculars fell out of the vehicle, and I only discovered it on our next stop... It was definitely the low of my day, however, I keep reminding myself "It's just stuff!" Nevertheless, I'm bummed it happened! Soon afterwards, we saw ANOTHER LEOPARD. Or, really just a leopard tail... The tail was hanging from a tree, but the cat was hidden too well between the brances for us to see it well.

Next amazing thing we saw was the cheetah with 6 cubs, just a month old. They were the cutest little things. (Photos are still on my camera, having transfered them to my computer yet.) From there, we headed to the Mara River, the deviding line between the Maasai Mara and the Serengeti National Park.

There we stood on the banks of the river and watched crocodiles, hippos, and an approaching herd of thousands of gnu (wildebeest) and zebras. This is the time of year that they cross over into the Serengeti (yes, it's the stuff you see on National Geographic Channel or on Discovery). We got back into the vehicle and waited... No-one in the herd seemed to want to take the lead in crossing the river. Some were literally already in the water when a croc scared them and they turned back. At that stage, we had to leave for the airstrip! What a bummer! Yet we left with our hearts full of gratitude for the most spectacular things we were able to see...

Back in Nairobi I took the team to a market and helped them bargain as they purchased some souvenirs. Came to Mayfield for a quick shower, went to dinner and then took them to the airport.

They had only 7 days in Kenya, however, this team made a huge impact. And they had fun while working very, very hard. The best, however, is knowing that they have left having trained our nurse in doing basic eyecare. And they left with a beautiful picture of Kenya in their hearts: Fara more than the wildlife and sunsets they saw, they saw the hearts of Kenya's people, and that, quite frankly, is what will stay with them...