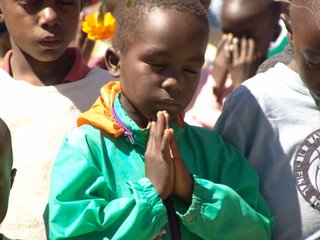 Earlier today, at Kipkaren
It's late. I'm pretty wiped out right now. And just as I was working just minutes ago, it struck me: I haven't washed my face yet!

Why on earth would that be important? I'm not in bed yet! Thing is: I was at Kipkaren today and hugged tons of kids. One boy in particular, Kiprono, kept coming back for more hugs. I was hunched up, hugging the littlest ones and making squeaky sounds every time one hugged me. This was one of those really silly games you sometimes play with really little kids. Anyway, Kiprono kept coming for more squeaky hugs.

Later, as we were talking with Juli and Allison, little Kiprono still hanging onto my hand, Allison commented, "What's that? ... Oh, ringworm. We'd better treat him for that." The young boy's ears were all broken out in the fungus. And I had been hugging him, his face touching mine.

Thing is, I don't want to first scan a child to see if they might have some condition before hugging them! And I don't want to run and wash up if I notice they have something. But as I walked off, I thought, "I'd better wash my face as soon as possible."

More than 12 hours later, I just remembered to wash my face. Oh, well. At least I know now how easy it is to treat ringworm, should I have caught it...

It was fun to see Rooney (he actually smiled at me when I said, "Sassa, Rooney?" I don't think he expected anyone to know his name!

So though I'm alive and thankful to be, I'm pretty wiped out tonight. Tomorrow, I'm heading back to Kipkaren for meetings. Oh, I really do pray for focus during the in-between times...
Posted by Adele around 2:58 AM