I can't imagine ever forgetting today

I met Daniel Morogo, our social worker, at a junction en route to Kitale. He knew where we would pick up each of our assigned kids for the day...

Our first stop was the house of Pastor Sylvester, a gregarious man with a big smile. Olivia (7) (pictured on the right) was brought to his house by her sister's husband. 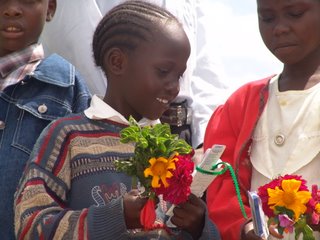 They have been looking after her since their mother died while also paying to put her brother through school. They cannot take care of both the kids, and seemed to have prepared Olivia well for the transition. There were no tears at the good-bye. She was excited to get into the Land Rover and sat on the tip of the back seat, asking every so often, "Are we there yet?" 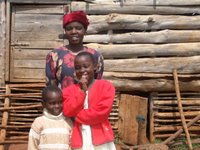 Next, we stopped at the home of Gladys (7) and Naomi (5). They posed for quick pictures with their cousins, grabbed their bag, and headed to my car. No tears. No hugs. Their one younger cousin tried getting into the car with them... As I backed out the long, muddy driveway, their aunt came running, explaining that little Naomi had a "little malaria." Soon, the little one was asleep on the back seat. Gladys, on the other hand, was covering her face for a while. I thought she might be crying. Instead, she was giggling with excitement! She and Olivia chit-chatted as we drove to the last stop for the day: Dominic and Dennis' home.

These boys (cousins? brothers?, both 7) came from their grandma's house literally
shining with all the vaseline they've been rubbed with. 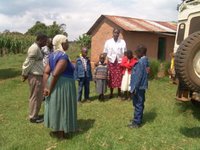 They were dressed in new outfits, and their aunt brushed their heads one last time... Then they gathered around to send off the boys with a prayer. The two boys didn't speak much English, but in the car, on our way to their new home, Dennis sang over and over and over, "This is the day, this is the day that the Lord has made..." When we'd be through singing, I'd hear his little voice starting again, "This is the day..." I asked him if he liked singing, and told him that every night, they'll be singing during devotions. He grinned from ear to ear!

Before heading to the children's home, we waited for the two other cars with nine more children. Once everyone was there, we drove the road to their new home. We'd go around a corner and there'd be a little hut. I'd ask the kids, "Is THIS your new home?" and watch their eyes grow big, probably thinking, "This is no better than where I come from!" And then... as we got close to the home, we started honking. As we rounded the final corner, a crowd was gathered, singing. 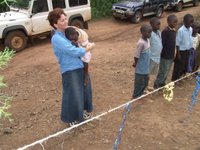 As the kids were welcomed, little Naomi fell asleep in my arms, hot with fever. Naomi on one arm, my camera in the other hand, I couldn't wipe the tears that ran down my face as I considered what an enormous change this was for each of the 14 children... Some came with a small bag of clothes. Some, like Dennis and Dominic, had new clothes. Many wore dirty, torn clothes, no shoes, and not a single thing they brought with them. 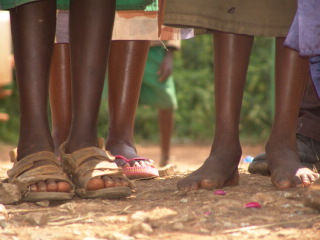 The kids were given lunch, introduced to their new parents, shown their rooms. They also played soccer with a visiting team, then had dinner... (Many of these kids come from homes where they haven't had a good meal in days. It will take a while for them to realize that there's good food three times a day, that they don't have to eat like they'll never see food again!)

Right now, they are asleep in their new homes. For most of them, this is the first time ever that they will have slept in beds, had running water to take showers, had flushing toilets.

The kids at Ilula (where I live) have been praying for the kids at Kipkaren, and tonight, when I told them about the kids having arrived, they clapped hands and said they'll keep praying. They are truly the only ones who can understand what the little ones are going through, the mix of excitement and fear... They have committed to keep praying, knowing that many of them cried themselves asleep for days.

Am I excited for the kids who we took to Kipkaren today? You bet I am! Is my heart breaking for them? That'll be a yes, too. They have all lost both parents. They have all had to live with relatives/neighbors who couldn't afford having them. They have all been given away, rejected. Yet they were being welcomed with open arms today into a community who has been praying for them and counting the days till they would receive the kids. It's such a mix of feelings.

I can't wait to go back sometime next week and spend time with Gladys, Olivia, Naomi, Derrick and Dennis. And to meet the nine others. Felix. Jepchirchir. Calvin.

Perhaps they were only excited today. Perhaps the mix of feelings were all in my heart, and affected how I saw them.

Either way, they're in a new place. In a big room. In a big bed. With a REALLY big God looking out for them.
Posted by Adele around 1:26 AM