Do we have 4th of July in Kenya? 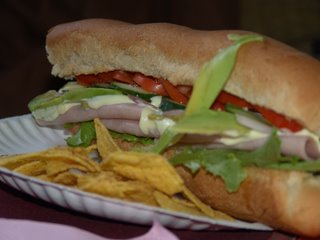 Of course we do. Just like we have the 3rd and 5th! Kenyans just don't necessarily celebrate this day. I specifically say not necessarily, since I happened to be at a celebration this evening with about 60 Kenyans. Here's the deal...

Earlier in the day, I had invited our two interns (Jared and Christy) over for lunch. It was Jared's birthday last week, but he was gone that day, and I wanted to make him what he's been craving most: good sandwiches! (Note that the cucumber and lettuce are from my very own garden!)

After lunch, I had to put together some of our paper to send to our other base so the visiting team can purchase it as gifts. I realized that it's going to be such a hassle to get the boxes to Kipkaren if I simply dropped them off at the office, and decided to take them to Kipkaren. I was happy to find out that the staff there were celebrating 4th of July with the team that's visiting from Nuevo, California, and agreed that the interns and I will stay for dinner.

We discovered that it was a BIG party, with all the Kipkaren staff invited and asked to wear red, white and blue. The team had decorated the room with balloons and more, and they had prepared a feast of pizza, calzone, grilled meat, potato salad, mixed salad, even brownies, banana bread and fruit salad. I must say, I was thoroughly impressed that the ladies were able to bake the pizza & calzone in their little charcoal oven and keep it hot! And that they made more than enough to feed the crowd of more than 60 people... I was bummed that I didn't take my camera, so I have no photos to share with you.

Anyway, we had a blast. All the Americans gathered as a choir and sang "Star spangled banner" WITH the Kenyans. (We non-Americans were given the words.) Someone explained that anyone that had been in the military was supposed to salute during the singing of the anthem, so it was so cool seeing Kenyans saluting while singing the American anthem.

Since it's at least an hour's drive home, I left before the entire program was finished. As the interns and I left, someone was giving a short overview of the history of the USA, saying that they were happy to celebrate--just like the Kenyans--the day they finally got rid of the UK. There was still going to be a skit and then the singing of the Kenyan anthem. No fireworks, though. Oh, there'd probably be mayhem if you shot off fireworks in these villages! No-one here has ever seen anything like it, so they'd probably think it's the return of Christ. Seriously.

And so, as friends gather in the US to barbeque and go and watch fireworks, I'm off to bed.

To all my American friends: Happy 4th of July!

P.S. As a special treat (not!), I discovered today that I have ringworm on my neck. No, it's not a real worm. It's a fungus that a lot of the kids have on their scalps and I'm blessed that it's taken me this long to catch it (probably from hugging them). Yeah, eh? What a nice gift... :) And yes, I have good anti-fungal cream that'll help it heal.

It won't keep me from hugging the kids, though.
Posted by Adele around 3:44 AM