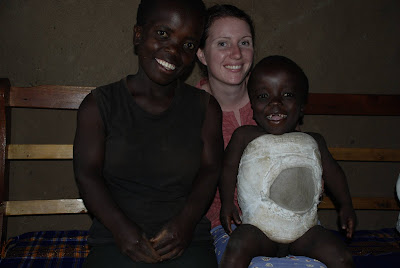 Earlier this week, I had the honor of meeting a mother and son with smiles that etched itself in my heart. "Come on a home visit with me," Juli invited me on Wednesday morning. "You'd love to meet my new friends."

On our way, Juli filled me in on the story. The mom, known to us only as Mama Daniel, had brought her son to our clinic in January. Both of them are little people, and the 5-year-old Daniel had problems with his spine. Our clinic staff referred him to the AIM hospital in Kijabe, the best hospital in the area for him to get surgery. "I always leave clinics crying," the mom explained to us. "But when I left your clinic, for the first time, I wasn't crying. I had hope." And so, last month, Daniel received corrective spinal surgery.

Last Sunday, this young mother had walked the 8 miles or so to church and has shared her heart at that time. Standing up in front of the congregation, hardly visible to anyone in the back, Mama Daniel shared how she had come to thank God for the surgery her son had received. She explained that she never went to church "because I always thought church can only be for tall people. But now I know that I can come here."

"What would you have me learn from this family, Lord," I wondered as I drove, pulling over to the side of the road a few times, asking for directions. Time and again, we'd be pointed to the next junction and told to ask there again. Everyone knew about this family, and my heart ached thinking about the challenges they face in a culture that is less than friendly to anyone with a handicap. And to make things worse, as Luyas, they hold tight to superstition.

In fact, the first thing I noticed about Daniel's baby brother is the string around his hips. I asked about it later, wondering if it has the same meaning as in Mozambique: a sign that the mother has taken the child to a witchdoctor for prayers of protection. I was told no, it's a wish for him to have big buttocks. (!)

Back to Daniel and his mom, though. The body cast, stretching from his hips all the way to his arms, may be limiting his movement, but it's not curbing his smile. Not even for a moment. I asked if I could take pictures, and the mom agreed with a smile as big as that of her son's. We asked about their family, about Daniel's health, about life. Every time, the 4-foot-mom answered with a big smile, "Mzuri sana." (Everything's very well.) Yet we weren't offered chai, certainly not because we weren't welcome, but more likely because the family had none to offer visitors. 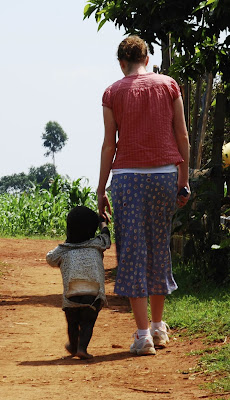 As we went into their mud hut to pray for Daniel, his mom, and his little brother Darius, the mom removed the floral shirt her smiling son was wearing so we could see the cast. She asked that we also pray for her mother, who was traveling. Immediately after the prayer, Daniel said he'd like to see the car we came in. He's just like any other little boy, I thought. I hope he gets a chance someday to drive his own car. But in this culture, chances are slim.

As we walked to the car, little Daniel's bare buttocks stuck out under his shirt as he walked hand-in-hand with Juli. He was smiling from ear to ear, excited about having had his own visitors for the day.

May he know you, Lord, I prayed. May he know the God who delights in him. And may he show others someday what it means to be a giant in God's army, his small stature despite.
Posted by Adele around 9:18 PM