It's late Saturday night, and the rain is falling outside, a strong, constant rain, the type that makes the crops grow and that fills the dams. We use hydro-electricity, I've been told, so drought means power rationing. It makes me like the rain even more.

It's been a full day. I was up by 5:30 after having had little sleep thanks to our hotel being in Nakuru's club zone, it seems. Our hotel? Nakuru? I had taken the three interns on safari. 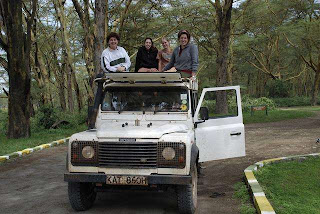 We left for Nakuru yesterday afternoon so we could stay at a hotel and enter the park as the gates open at 6:30, which we did in fact do. I drove the girls around with both the safari hatches on my car down, so they stood the entire time, appreciating the wildlife. We stopped for chai and a time of debriefing, reflection and prayer around 11:00. (Went to Sarova Lion Hill, which overlooks the lake. What a treat to sit there and talk about "Now what? As a result of having experienced what you had experienced, what do you believe God wants you to do differently when you return home?" This truly is one of my favorite parts of my job: walking this journey with visitors.) After the break, we drove along the lake shore for another hour or so and then headed out, the girls to go shopping, and me to have the car washed... (The lake is very salty, so it's smart to get the underbody pressure washed after driving along Lake Nakuru.) We were on the road to Eldoret by 3 and arrived home by 6, praising God for a safe journey.

Perhaps you'll understand better if I tell you that the journey between Eldoret and Nakuru is all of 160 kilometers. That's about 100 miles. It takes 3 hours because of the potholes and speed bumps. There are sections where you simply cannot go any faster than 20 kmh at the most, constantly zigzagging across the road. It's times like those that I yet again thank God for a good vehicle.

But back to our safari. (I'll upload photos in the morning. Too tired to do so now.) Some highlights:
It's good to be back in my bed, though. I hope I don't dream of driving...
Posted by Adele around 2:29 AM