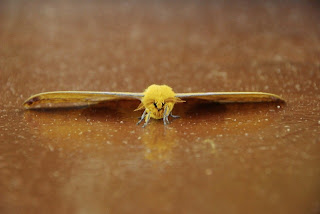 This morning, members of the visiting team pointed out this silk moth that was sitting on my wall. I grabbed my camera, eager to put into practise some of the things Micah told me last night. I like how this picture turned out.

On a more serious note: News about yesterday's bomb in Nairobi is still a bit sketchy. Local papers report that two guys tried boarding a City Hoppa bus that was heading to the airport. They weren't allowed on the bus because it was full. They stepped of the bus and waited at an adjacent cafe. When a street sweeper asked them to move their bags, they ran. (Seems from the report that they noticed a problem with the bag.) The sweeper was the only person killed in the blast that injured 41 others. Pages of the Quran were found strewn in the area, suspectedly coming from the bag that had exploded.

There has been quite a lot of issues around the capital lately. A sect called Mungiki is trying to create fear as we are getting closer to Kenyan elections. More than 30 people were killed this weekend in a raid when police tried to catch Mungiki members. I am far from the city, so no need to be concerned for me. Please do pray for Kenya, though. 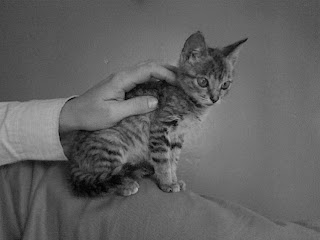 On a much lighter note: Flannel is doing marvelously! She even accompanied me to a birthday celebration tonight for one of the team members and slept in the hood of my sweatshirt for much of the evening. (She came home and pounced around the house before plonking down on my lap again, currently purring like an engine.) While I was decorating the cake today, she did something she did last night, too, as I was cooking dinner for guests: She'd come and lay right on my feet in the kitchen, as I'm working. She really is adorable, although a little scruffy looking still. Great personality! You can see new pictures of her on Flickr.

I wasn't able to upload the post last night due to a power outage. It's a beautiful Wednesday morning here, and I'm off to breakfast with the team, then taking some of them to town as they're heading back to the US. This evening, we have a farewell for our Ilula intern. In between these visitor events, I have a to figure out which items on my list for today is the most important and get at least a few checked off.

Hope your day is productive and full of unexpected blessings.

Adele
Posted by Adele around 2:10 AM