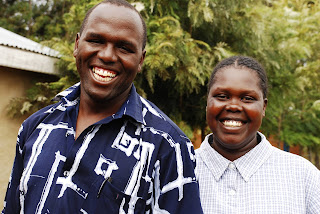 This morning, after spending several hours in the office working on projects, I got to go and see my friends at the ELI Drug and Alcohol Rehab Center. I've been back in Kenya for a week now, and the times spent visiting and greeting people is far from over. Many others have invited me over for chai. I may have mentioned this before, but the driving value in Kenyan culture is relationship. (In the US? Entertainment/Leisure) So, unless you spend time visiting people and building strong relationships, your work might as well be in vain. It's simply not received well.

Let me tell you about the Ronos who are the directors of KAA (Kenya Anti-Alcohol). Pastor Philip (or simply, Rono) is younger than I, and for the past 8 years, he's been directing the KAA program. It started in 1999, when a visitor came. The man was a recovered alcoholic, and Rono was asked to take him around and be his translator. During that time, the visitor and others encouraged Rono to start an anti-alcohol ministry. He wanted nothing to do with it since he came from an house where alcohol was a problem. (He himself never was an alcoholic, though.)

But before the visitor left, God spoke clearly to Philip. “You’ll continue this ministry,” God told him. Philip says that he was scared at first, but God taught him and strengthened him. The first group to meet consisted of just 5 men and quickly grew to 18. When he started meetings across the river, there were 38 men who got saved from the grip of alcoholism. He then started meeting with officers at the nearby police station, and soon afterward, a group of soldiers at the Kenya Army Barracks.

Since that time, 1200 men and women have graduated from the Kenya Anti-Alcohol program. “But there are more,” Philip says. “Many of the men and women have helped others get free. I want to continue doing this ministry till the day I die. I have seen the hand of the Lord here. It is so moving to see the reconciliation between families when they come to visit for the first time after their husbands/fathers are sober!”

I love being able to work alongside people like the Ronos. They have an amazing heart to see people set free!

***
After coming back to Ilula, the team returned from Sudan. They were tired and ready for showers. I listened to their stories till our last visitor for the week arrived, a lady from Saddleback Church named Tammy. After dinner (and the usual post-dinner team meetings) I took Tammy to say good-night to some of the girls.

It was 10 by the time I got back to my home, and then I had to type up information from interviews (such as of the visit with the Ronos) for a project the home office is working on. It's after 11, and I'm ready to start heading to bed. I have a 5:30 am prayer commitment with Ruth, one of the moms at the home, 7:30 breakfast with the team, and then we're off to Kipkaren.

In Kipkaren, I get to track down the last of the staff whom I need to interview/photograph and will see what other opportunities God brings. If nothing (and if the team doesn't need my company), I have a very long list of tasks to tackle, including working on learning Swahili.

Friday we'll probably leave for Moi's Bridge/Natwana no later than 7:30 and we'll be at the AIDS campaign the ENTIRE day (and into the night), where I'll be taking photos and praying for those being tested.

I'll head back to Ilula early on Saturday morning, attend Laban and Angelina Rono's 25th wedding anniversary celebrations, whereafter I'm putting on the first-ever Ilula Birthday Bash. Since there are 100 kids, it's hard to celebrate birthdays. The moms had mentioned to me last year that they'd love to do a monthly celebration, but they're not sure how they can do it. We visited about it again last week and have come up with the plan to celebrate the first Saturday every month. Ruth (a mom) is baking a big cake. I've got cards for the 35 kids who've had their birthdays from January till April. And then we'll watch Happy Feet. Or Cars. Or Charlotte's Web. Not sure yet. The boys want to see "the movie about the cars that talk." The girls want to see "the one about the pig that can talk." I'm thinking I'm going to have to show them something else, just so no-one wins! :) And then I need to remember not to say much when the kids ask me what other movies I brought back... :)

In case you're concerned about me showing the kids movies and basing my relationship with them just on that, it's far from it. I was hesitant to start showing movies again right away, but the parents asked me to please show the children movies whenever I have time on Saturday afternoons. They say that the teachers at school have been commenting how good our children's English is, and what amazing stories they come up with for their creative writing assignments.

I've started showing the children one or two pictures I've taken of birds in the area. My goal is to create an awareness with them of the intricacies of God's creation, and show them what to look out for in identifying different birds. I'm hoping at least a few of them will realize what a wealth of bird life they have around them, and who knows, perhaps they might grow up to be game wardens in Kenya's parks. At least they'd know about the birds in this area, I hope. :)

Anyway, it'll probably be Saturday evening before I get to connect online.

As you can see, the lines between work and leisure are very blurred in my world, especially when teams are here. It's not like you can walk out of a late-night meeting or choose not to show up for early breakfast.

I'm babbling. It's late. I still need to pack for my 2 days in Kipkaren.

Lala salama. Or have a blessed day, wherever you may be.
Posted by Adele around 2:56 AM