It's the Year of the Pig: A brief introduction to Chinese culture 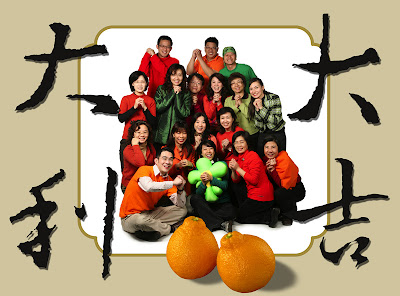 Most Westerners don't realize it, but today is a very significant day for about a third of the world's population: It's the first day of the Lunar New Year. Today ushers in the year of the pig. Some of my good friends in Taiwan sent me the picture above to wish me a happy New Year. You'd notice how they hold their fists together. That's just what you do on this day. It's like we'd shake hands or hug someone.

So what's the deal with the lunar New Year? Apart from the fact that it's the start of the largest annual human migration (with Chinese people traveling around their countries and the world to visit relatives), it's a time of celebration in all Chinese homes.

If you don't like the sound of fire crackers, this is not the time of year you'd want to be in Taiwan! Starting last night, people would shoot off fire crackers for the entire week at all times of day and night. (On a side note: fire crackers were banned in Beijing until this year. The ban was lifted this year, and today, 125 people were treated in that city for injuries sustained because of poor safety measures. One person totally lost his eyes!)

Why all the fireworks? It all has to do with a legendary dragon. The dragon (Nian, pronounced sort-of like knee-yen, but a shorter sound) is feared for the terror and destruction he brings. The good thing is that Nian fears the color red, and he hates loud noise and light. And so everyone wears red, there are red banners everywhere, many families keep lights and candles burning all night on the eve of the New Year, and, of course, shoot firecrackers. The way you thus greet people on New Year's day is by congratulating them that they survived the dragon!

About those red banners: People would put up signs with the words for spring (chuen) and fortune (fu). However, at this time, they'd put the words upside down! That is because the Chinese word for upside down (dao) sounds like the word that also means arrival. So, by putting the characters upside down, you're effectively saying "chuen dao" or "spring has arrived" and "fortune has arrived." (Chinese culture is very much into sounds!)

Last night, on the eve of New Year, families would not only stay up late to keep the dragon away. (In fact, very few people would've gone to bed before midnight as that would bring bad luck.) They gather for major family get togethers, almost like American Thanksgiving. But there's no turkey on the table. Dishes include fish (because the Chinese word, yu, sounds like the Chinese word for left over) and other tasty treats. By the way: You'd never finish eating all the fish during New Year's! That would be bad. There should always be some fish left over, symbolizing that they'd always have enough...

After New Year's Eve dinner and into today, non-Christians (and some nominal Christians who fear they might offend the spirits) visit temples to burn incense to their ancestors. People would've woken up early this morning to welcome the gods of heaven and earth, and to pay respect to ancestor spirits. They would pray for good fortune for this year, although, according to a Taipei fortune teller, the year of the pig isn't going to be a good year. (Perhaps people were praying even harder today than at the start of a year for which good things are predicted!)

Today would've also been a very important day to go and visit friends and relatives to wish them all a happy New Year. (Hence the major migration!) You'd say "Hsin nian kwai le!" That means, "Happy New Year!" Starting on New Years eve and during family times together, people also play a lot of mah-jong, and many play for money.

Everyone wears new clothing, including the idols. (People clean off their idols and dress them up in new clothing.) And of course, most of the clothing would be red. Adults are expected to give every child who comes to visit a red envelope (hungbao) with money in it for good luck and to show they care. The visits thus become quite a profitable event for kids and young, single adults. (In Taiwan, a recent tradition is for people to line up to receive hungbao from the President. These only have a few cents in them, though.)

The third day of the New Year is a quiet day (unless, of course, you had traveled far to get to your wife's family, which would mean you'd have to travel back home on day 3.) Day 4 is to welcome back the family gods... Altars are set up with elaborate gifts for the spirits, including anything from bowls of rice to beer, and lots and lots of ghost money is burned. This isn't real money, but goldleaf paper that gives off a lot of smoke when burned. It's for your ancestor spirits to use in the heavens.

As you can see, the Chinese culture is typically very superstitious. One of the biggest challenges in sharing Christ in that culture is to help new believers come to grips with living in a culture where much revolves around worshiping the spirits of their ancestors. How do you go home as a Christian and show respect to your ancestors but not worship them? How do you not offend family by not going to the temple to burn incense to the gods? Many traditional/Buddist families would claim that if a Christian family member will not participate in the worshiping of idols, he/she is bringing bad fortune to the family as a whole. And this presents you with a delimma. But that is a whole other issue.

What I loved most about the 7 lunar New Years that I celebrated in Taiwan was the fact that you'd usually get a good bonus right before the holidays. And that meant that if I planned far enough ahead of time to actually find seats on a plane bound off the island, that friends and I would typically travel during the week of Lunar New Year, thus avoiding sleeping with earplugs for a week, and wandering around a city without people...

Unfortunately, all my photos from Taiwan are back in South Africa, so I cannot upload pictures for you to see. I do hope, though, that through reading this, you were able to get a little bit of a glimpse of an important holiday in the Chinese world.

For more on Chinese New Year, read the Wikipedia article on this topic. Or visit the Taipei City Government's Web site for information.

In case you're wondering what the Chinese words on the picture says, it's "Da ji, da li." The literal translation, says master linguist Angela Wills, is "Big auspicious (favorable circumstances and good luck), big prosperity," or in Christianese, "Have a blessed and prosperous New Year." That's what I love about the Chinese language. Just four little characters to say so much!
Posted by Adele around 10:29 AM