Yesterday, I was in a plane crash 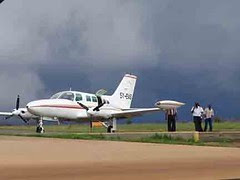 plane-crash
Originally uploaded by Boyznberry.
The fact that I am writing this report means that I obviously walked away unscathed. It wasn’t nearly as bad as the title may sound, but it was a plane crash, nevertheless!

After Guardians’ Day yesterday (a whole other story which I’ll tell later this week), I joined the visiting team for their journey to Nairobi. Half of their team was arriving from Tanzania, and I was to lead a short time of debriefing in Nairobi before they left for safari.

We arrived at the airport in good time and were delighted to be offered seats on an earlier flight. (There are NO earlier flights here. There's one flight from Eldoret in the morning and one in the evening. But an 8-seater was apparently passing through from the Maasai Mara, dropping off passengers.) The sky looked eerie with very dark clouds as a storm was brewing in the West, and the pilot asked everyone to hurry so we could beat the storm.

Seemed like someone on the ground hurried TOO much, removing the tail support beam too soon (or perhaps never putting one down). So when we were all in our seats and the pilot got in, too, he head to ask the passenger by the door to step back so he could close the door.

Next thing the nose of the plane went up and bam! the tail hit the ground. (In case you're skimming this entry you may have missed the part that we're still ON THE GROUND, NOT MOVING. No need to panic.) So we were asked to all get out. As the pilot walked around grumbling at the ground staff for not doing their work, we carefully got out of the airplane.

So now I can officially say I've been in a plane crash and walked away unscathed. The same cannot be said for the little airplane, though. The tail had bent upwards, so the rudder couldn't move!

I was, in fact, VERY happy to get into a bigger (albeit still small) plane for the flight to Nairobi. It was rather scary seeing the lightning seemingly right outside our windows as we flew into Wilson airport. And of course we didn't think it's a good idea to get into a plane that didn't have an operating rudder...

The reason I was with the team, as I said earlier, was to lead some debriefing discussions. Having had less than 3 hours’ sleep on Friday night, I’m not sure how much sense I made last night and like the team, I was very happy to head to bed for a good night's sleep.

After breakfast today, the team headed to the Maasai Mara. I went to church in Karen, picked up a few gifts in town, and this afternoon, I flew to Johannesburg.

It's good to see my sister and her family! Unfortunately, my time in South Africa is too short to see my entire family.

I’ll try and post some updates from Pretoria this week.
Posted by Adele around 2:45 AM