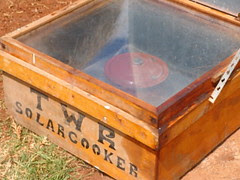 Cooking mung bean soup
Originally uploaded by Boyznberry.
When I was at the market earlier this week, I saw a vendor with tons of different beans, among others, mung beans. (Chinese, lyu dou.) I craved one of my favorite Chinese desserts, sweet mung bean soup, so I decided to cook some. But the beans would take eons to cook without a pressure cooker, so I cooked them in the solar cooker yesterday! I started the cooking process in the afternoon, though, so the cooker's out in the sun again this morning so it can finish cooking.

The solar cooker apparantly works wonderfully. My colleague Amy says she's even baked cake and bread in it.

Other news: My house is coming along really fast now. The bedroom and bathroom were painted yesterday, and I wouldn't be surprised if the rest of the paint is done today.

The fundi are working on building my bed as well as the kitchen workspace. Originally, I had hoped to move in around Valentine's day. That might still be possible, but it wouldn't surprise me if the move only happens later in the week.

Yesterday, I went to town with Don and Amy and we had dinner at Sunjeel Palace, an Indian restaurant. The food was wonderful! And so was the company.

Tonight, I'm having dinner at the Teimuges' house. (I think I'll take over some of the sweet mung bean soup for dessert.) And tomorrow, being Saturday, we'll have our new weekend event: Movie night. The Rogers family have a ton of kids' movies, so we'll be watching something like Finding Nemo, perhaps.

My life really is about more than just eating and showing movies. I've been able to get lots done on the computer and am working on setting up a blog for ELI. Next week, Don and others are going to our new site in Sudan, and I want to be putting updates on that blog while they're there so our prayer supporters can know exactly how to pray.

That's all for now. Back to work.
Posted by Adele around 2:41 PM