She did it. Fair and square! Danette sold ice to an Eskimo. There's a group of pastor's wives at the lodge this weekend, and three of them are Eskimos. I was joking with Danette earlier today that she should get one of them to just pose with a bag of ice to pretend she had sold it to them. But trust Danette... She was visiting with Sandra at dinner when suddenly she asked, "Hey, do you want some ice?"

"Sure!" Sandra said without thinking twice.

"How much money do you have?"

As Danette walked off to get the ice, Sandra looked at her neighbor and said, "I just paid her to get me ice cubes!"

I got a quick shot as Danette delivered the ice. Sold. Ten cubes for a quarter. We laughed so hard, I still have a headache! The Yup'ik ladies asked that I clarify that Sandra is a Chup'ik (two different sub-groups of the Eskimo peoples). They say neither of them would've fallen for it. :) 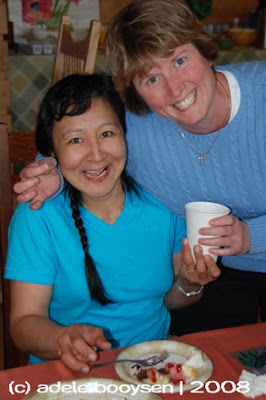 Salesperson par excellence!
And that after my friend and I had just walked around on a glacier. No kidding. We were told we might be able to go along with Paul and Chris (a glaciologist) when Chris had to go and measure some glaciers today. That didn't pan out due to foul weather. But Paul took us across the river and into the Wrangell Mountains. We saw glacier after glacier, even saw some mountain goats (no bears or moose today), and then Paul asked, "Have you ever stood on a glacier?"

Before we knew it, we were down on the ice! This is NOT something the average pilot can do. Paul's flown more than 23,000 hours, and this is his valley, so he touched down without as much as a bump.

We hopped out to take some photos and walk on the crunchy ice. It's crunchy because of the glacier dust which makes it like a bread crust, kind of. It's the most incredible sound when you walk on the ice! And it is c-c-c-cold! 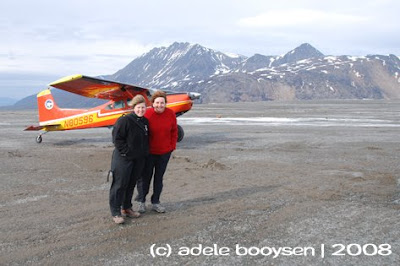 After playing on the ice a little and drinking a bit of the glacier water, we took off again. To our right (north?) was Bagley ice valley (an ice field), which combines with Bering Glacier to form the longest mountain glacier in the world! 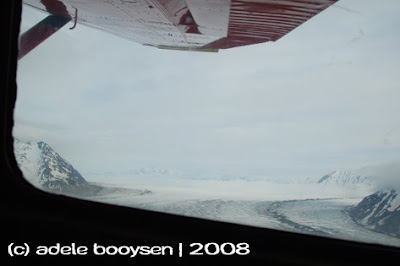 We flew across more glaciers and were mesmerized by the colors... 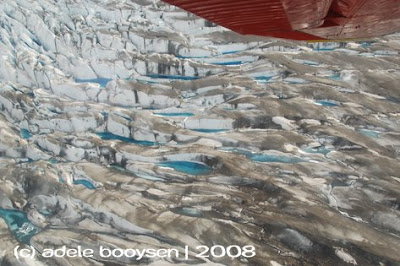 One of the many incredible scenes was the ogives. This is simply another side of the glaciers. They look like ice terraces. Each line, Chris tells me, represents one year in the life of the glacier. This ogive would be almost as old as I am! 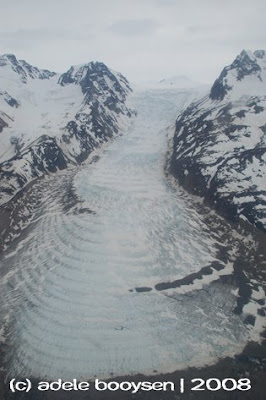 Quite honestly, I was ready to be on solid ground for a bit by the time we landed. But this is an adventure I'd never forget. And the cherry on the top? My friend's sales deal!