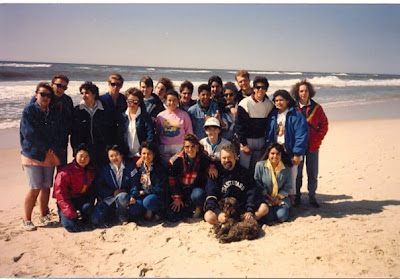 When I was a Rotary Youth Exchange student in 1987, I had a friend from India who was hosted by the same Rotary club (Bellport, Long Island, NY) and we went to the same school (Bellport Senior High). Manoj and I were great buddies. We hung out together at the weekly Rotary meetings, and we had a blast with the other exchange students in our district (Suffolk County). In fact, the photo above was from a trip we all took to Fire Island. I'm the kid in the middle with the white visor. Manoj is behind me.

Then, after the summer of 1987, Manoj and most of the other students left. Only the South Africans--maybe the Ozzies, too?--stayed (since our school year is from January-December). I became part of a new graduating class* and met a whole new group of exchange students.

Soon after I returned to South Africa, my parents moved to a new town, so the address all my friends had for me was no longer valid. And so in the process I lost contact with all my friends from around the world.

Thanks to Google and Facebook, some of us have reconnected. And tonight, I got a phone call from Manoj. Twenty one years have passed since we last talked! We visited forever and could've talked for hours more, catching up on what's up in each other's worlds. He's married, has a girl and their family lives in Chicago! I hope to somehow get to meet him and his family when I'm back in the Midwest. (I'm leaving for California on Friday.)

And in the process, I've reconnected with a bunch of other exchange student friends, too.

So, in case someone out there is randomly reading this and happened to be a Rotary Youth Exchange student somewhere between 1986-1988, join Facebook and connect with us! There's even a Facebook group for the cross-country tour of the summer of 1987. One person is hoping to reconnect all 326 exchange students from 40-some countries...

* Useless Trivia
I have the rare joy of being part of THREE graduating classes:
Class of 1986 back in South Africa - my real high school graduation
Class of 87 for the first half of the year - I actually have a graduation certificate from that year...
Class of 88 the second half of '87.
Hence I've been receiving 20th high school reunion invites for the past 3 years!
Posted by Adele around 11:01 AM