I'm sitting in my favorite spot in Kipkaren: in the gazebo by my house, overlooking the river which, by the way, is fuller than I've ever seen it! Almost like the base itself. We've had visitors galore: a team of two computer guys, a team of three people from APU's Mexico Outreach, two interns, and my sister, Sanet.

Sanet landed in Nairobi about an hour before I got in from Rwanda, so it worked out great to meet her at the airport! We spent the next day in Nairobi so I could show her around, and drove to Eldoret all of Saturday, even driving through a hale storm...

Since Saturday, I've been trying to catch up on projects, write up things from Congo, stand in for the Kipkaren computer teacher, visit with the team people, and host my sister. So things have been only slightly crazy. But it's been good.

Tomorrow, I'm taking Sanet and the McCright interns to Ilula for a 2-day visit, after which we'll come back to Kipkaren. I might take Sanet to Kakamega forest this weekend if the rains don't continue as they have been. In fact, just for fun, I'll post this picture which I took of my colleague Juli this afternoon for a project she's working on. You can see how ominous the sky looks! We had hardly gotten home when it started to POUR!

I look forward to seeing all the kids tomorrow, including the Sifuna kids down the road. :) 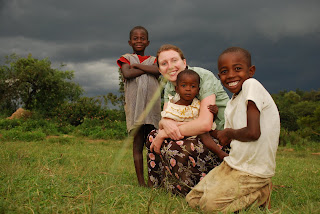 Posted by Adele around 1:07 PM