I have a cold, it seems. Maybe just a sinus infection. My head is throbbing. To add to that, today was a crazy day!

Other than the fact that I have this head cold, a bunch of crazy things happened today.

A snake was killed in my house, to begin with. I didn't get to see it. My sister Sanet found it while I was at staff devotions and had a Kenyan kill it. It was a house snake, it turns out, but nevertheless, a scary sight to see lying curled up under some shoes...

Next, a colony of red ants invaded Sanet and my shoes. OK, I'm exhaggerating, but having around 10 big ants bite you is not funny. Not first thing in the morning. Not ever, actually. At least I found mine shortly after putting on the shoes. Sanet's started attacking only after we were in the car and they were halfway up her pant legs! She got rid of them before I started driving.

Sanet, my colleague Juli and I were going to Ilula today for 3 reasons: We had been invited to a colleague's home for lunch, and I had to take photos of new staff. Plus Juli wanted to go and say good-bye to the visiting team from her church. #2 and 3 could've happened tomorrow, when I have to go to town in any case to take Sanet to the airport. But lunch had to be today. It had been arranged yesterday morning, and though I tried several times to call the colleague to make sure it's OK we're coming, his phone wasn't on, so I just had to trust he'd remember.

By the time we pulled off the main road onto the soil road to Ilula, it was evident that the road was much worse than it's been since I've been in Kenya. But I have a good car, so I wasn't concerned. We just slowly drove through the worst parts till we finally pulled into Ilula. 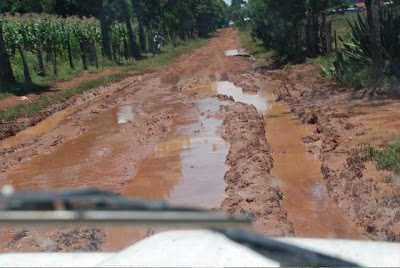 This is the worst stretch. Though it looks like it's "only mud", several cars have gotten stuck in this patch in the past week, so there are deep potholes hidden by the mud. Which, in turn, has caused more cars to bottom out and get stuck... 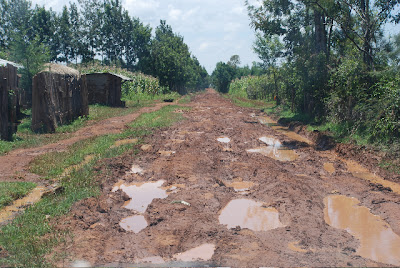 The next worst patch. I found that the safest thing literally is to drive with my tires all the way against the mud wall on the right.


OK, so we made it to Ilula. But it turns out the colleague forgot about lunch. But it also turns out that the team decided to leave a day early due to the road conditions. They didn't want to risk having to drive on that road in the morning since it's been raining most nights.

So I interviewed the new staff and took their picture. I packed a few more things to bring to my house in Kipkaren (like my hair drier). We visited and then had to leave just as the team joined the kids for a lunch celebration for the 3rd anniversary of Ilula Children's Home. We couldn't stay due to having to be back at Kipkaren by 4 for a women's Bible study.

And so we pulled out, back into the mud. By the time we got onto the main road, it felt like something was wrong. It was, indeed. My left, rear tire had been punctured by one of the rocks that had been placed to fill the muddy potholes.

Out we jumped, Sanet, Juli and I, and exercised the most amazing teamwork in changing a tire! I pulled out my super-size car jack, and Juli - bless her heart! - started jacking up the vehicle. Sanet in the meantime hauled rocks over to place in front of the front wheels. And I got dirty by starting to unscrew the nuts.

Keep in mind that we had just passed through mud that was literally as deep as the wheel nuts, so it made for one very messy job unscrewing it all.

Now, this is Kenya. In Kipkaren or Ilula, people would stop in a heartbeat and offer to help. But we were close to town, so no-one seemed to care. In fact, I think we were quite the spectacle! A group quickly gathered to watch the three wazungu ladies change a Land Rover tire.

Just like that, the tire was off and the spare tire was in place. Well, actually, getting the spare nicely in place took great effort. Land Rover tires are HEAVY! Nevertheless, we did it. As I lowered the vehicle and Sanet was tightening the nuts one last time, two men stepped up. One asked if he could help. I do believe he had been watching us and thought by helping at the last moment, he'd make a very easy tip. We politely declined. The other gentleman simply wanted to know if we could give him a ride to town. I politely declined, quite amazed that he would watch us struggle, but then ask for a ride. After all, we were very close to town, on the main road, where it would take all of 2 minutes for the next taxi to pass, and it would cost him a mere 20/= (25cUS) to get to town.

But the craziness of the day was not yet over. Since we all had different errands to run (I had to get the bad tire fixed while Sanet had to buy groceries for me and Juli had to do a few other things) we agreed that I'd simply call the others once I'm ready to pick them up. And depending on how long the tire takes to get fixed would determine where they'd be in terms of their errands.

I first dropped off Juli, then Sanet. It's then when I noticed that Juli had left her phone in the car. I figured she'd figure out how to call me, so I proceeded to the garage and watched a very capable elderly gentleman find the two cuts in my tire and fix them at a cost of just 200/= ($3)! Not long afterwards, I was heading back to town, happy to know that everything's once again fine.

While waiting for Sanet, I got chatting with Kanmau, a street boy. I encouraged him to go and stay at the shelter for street boys, but he wanted nothing to do with that, basically because they aren't allowed to sniff glue while staying there. I took him to the bakery, bought him some bread and something to drink, found Sanet, and we headed to the part of town where Juli had since left a voice mail that she'd meet us. As if planned perfectly, we pulled up just as she came walking with some of the goods she had to purchase for friends back at Kipkaren.

One last stop: Raiply. We're getting some cabinets made for the office, and I needed to buy plywood. They didn't have any at the hardware store when I went earlier in the week, so I was heading directly to the supplier. I quickly learned that it's quite the process getting wood there! In fact, to buy three pieces of plywood took me maybe 30 minutes and I had to stop at no fewer than SEVEN "stations" before I was cleared to take the wood home.

That's when our very last almost-catastrophe of the day unfolded. As the guys were placing the planks on my Land Rover's roof rack and started to tie them down with ropes, a wind came up and blew one plank off the top of the car. All I could do was stand there and watch it fly like a magic carpet, heading straight at a woman! Fortunately, she saw it coming and DUCKED just in time as the plank barely touched the top of her head! The wood landed nicely behind her while the woman kept walking, totally amazed at what had just happened. The guys, in the meantime, were cracking up, while I apologized profusely to the still-walking woman. Seriously, she could've been hurt BADLY had she not ducked!

The rest of our drive was uneventful, though it felt like the security guards at the gate was never going to let us go. They were telling us how the one guy lost all his earthly possessions in the recent floods, and how one of us should come and be the guest of honor at his harambe (fundraiser). We politely declined and were finally on our way home.

Unfortunately, I wasn't back in time for the women's Bible study at 4. I'll plan to join the ladies next week instead. It should be good.

But for now, I still have photos to put on CD for my sister and a few last tasks to do before I can call it the day. We have to leave for the airport no later than 6 am tomorrow. I only have 2 meetings in town, and should be able to be home at a decent hour, and get caught up on lots and lots and lots of work that have been put on the back burner while I was hosting my sister.

It's been good to have family around for a bit. Poor Sanet got to experience the wild side of life in Kenya, though! In fact, just this morning, she asked me if I've often had a flat tire, to which I could say, "Thankfully, only once." But now it's, "Only twice, so far."

It takes a good jack. Some basic mechanical knowledge. And good teamwork.
Posted by Adele around 9:54 PM