So, I got stuck today. Sort-of. I don't think one can call it being stuck when you were able to get yourself unstuck by just putting some rocks under your one wheel. Perhaps I was just temporarily without traction. Temporarily inconvenienced. Bottomed-out, but just for a bit.

Erin, a visiting ELI staff member from our US office, was in the car with me heading from Ilula to town when we got delayed. We had a carload full of people we had picked up along the way. The usual thing here, you know. But they were heading to church (as were we, actually) when the road was deceiving. Much of the rest of the road was already dried out by the sun. But this patch was in the shade, so . . . yeah, well, we got delayed. 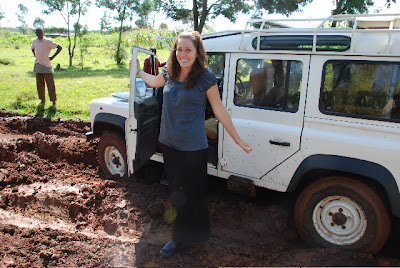 The passengers all hopped out and continued on their journey to church. There was nothing they could do, anyway. As I looked to see what I could do, a quick crowd gathered. Some men offered to help push, but I had called guys from Ilula to come, so I told them so. Another man thought we should get a tractor to pull me out. Others just stood and stared. One asked if I had tried engaging 4WD. Ummm, no. (Of course I had. The car was, in fact, in Differential Lock Low. Not that I know what exactly that means. But it's supposed to be used "in likelihood of traction being lost." Today was a good time to try out DifLock. It didn't work. Not at first.) 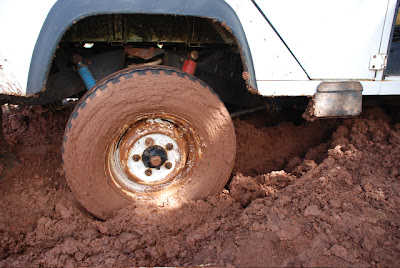 So while everyone watched and the boys giggled at me starting to pick up rocks, I did just that. I started placing some rocks in front of the wheel. And behind it. Just so it had something to grip onto. Erin grabbed some more rocks. The boys stopped giggling, realizing we wazungu women were serious. They brought a few more. All in all, we must've just thrown about 10 rocks in front of the wheel and one behind it. Then I simply pulled forward and "Voila!" it went. Erin had to catch up down the road, when I got to solid ground.

Then we had to get the mud washed out from under the car. So we missed church today. Or, at least, we missed worshiping with others. Life here is church, many a day.

The rest of the day didn't hold nearly as challenging events as getting unstuck. No other rocks had to be hauled around, at least.

We met colleagues for lunch. Went to see their house in town. I had about 6 cups of chai in the process. Got sunburned and rained on in the same lunch hour. And after we picked up another colleague from the airport, we headed home while the rain was still coming down in a steady drizzle. Got home just before dark.

As I got home and visited with God about some challenges of the day, I wondered how often I get deceived by how simple something looks, only to get stuck. And Jesus reminded me that He is my rock. With him, I can get out of any mess.

I may still get out dirty on the other side, a reminder of my choices, but I'll get out. And then I can be cleaned up.

And so right now, it's time to go take a shower and get rid of the mud that's still holding on to my legs as evidence of this morning's delay. And then Jesus and I can continue our chat about life's lessons...

Got into the shower just to discover there is NO water coming out of the faucets tonight... TIA. TIA.
Posted by Adele around 11:40 PM