Stepping Back in Time 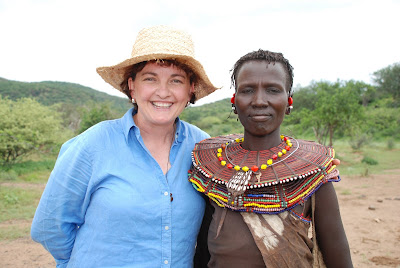 When I saw the first group of women walking by the roadside with their elaborate bead work around their necks, I knew I made the right choice to come to East Pokot. It might be a once-in-a-lifetime experience, and I don't like passing those up. Not even when I have a cold.
My neighbor Daniel Davis (or simply, Davis) had grown up in East Pokot, and he and his family were heading home to visit friends and family in that area. I tagged along simply to see a part of Kenya I had never seen. Pastor Peter, another colleague, also came along. He and Davis were planning on speaking at a few places to educate the Pokot about ELI's agricultural program and challenge some young people to apply for the next intake.

The five-hour drive, it seemed, took us further than just how far a pickup can carry you in that amount of time. It felt like we had been taken back in time, to a place in time that you but read of in Africa travel books.

"Karam!" Davis greeted a group of kokos (Kipokot for grandma). He enquired about the road to Orus. "My uncle had built a road here [to Orus]," he explained to Peter and I. "There are two white rocks on the side of the gravel road indicating where the narrow road to their village starts. But it looks like that road has been washed away by the river." The kokos pointed out a small road that would eventually lead to the other road, and our journey continued.

On this road, which took us through many a dry river bed (as well as through one that was all but a dry bed!), we passed several herds boys in their shukas (men's skirts, essentially), their upper bodies glistening with oil (probably animal fat). Almost all of them wore an ostrich feather in their hair. (I couldn't take pictures at the time, and simply had to commit these sights to memory.) Davis explained that there had to be some sort of event going on since people don't usually wear the ostrich feathers just every day.

When we passed another group of kokos, all decked out in layer upon layer of beads draped across their shoulders and around their necks, Davis stopped again. "Karam!" he greeted with a smile. Reaching into the car, they shook our hands and continued the visit in Kipokot.

"Where are you going?" Davis enquired.

"To a thing," one koko explained.

"A thing!" she said emphatically, as if it were a real answer to his question.

Davis, with his usual smile, related the dialogue to the rest of us. "It really can be anything. A harambe (fundraiser), or even a circumcision. Or it could be that there the couple of tourists we passed in one little village is paying people to come and pose for pictures. Who knows!"

In case you missed the c-word in there, circumcisions attended by grandmas wouldn't quite be for young moran (warriors). Sadly, FGM is something still widely performed in that part of the country. In fact, later in the weekend, I was listening to one church lady explain to Davis' aunt how her daughter and son-in-law have had challenges because the daughter wasn't circumcised. The husband is a Christian man who was fine with his wife not undergoing the traditional ceremony. But after having been married for 6 years and only having one child, people are blaming it on the wife opposing this "essential" ritual. I'm praying that they'll get pregnant soon so people can know that their barrenness is not due to her not being circumcised!

Back to the journey: When we made it to Orus, we were greeted by Davis' uncle and aunt (who have been missionaries in this remote area for something like 10 years) as well as his cousin, his wife and their baby. Davis and Peter continued the journey to a village another 3 hours from there where they were to speak at a meeting. The village where they were heading was where Davis' family lived for 15 years. 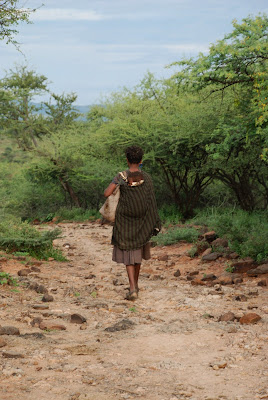 Young Pokot mother and child
As neighbors started trickling in to greet the visitors, I took my camera and some water and went to explore. Hiking up the hill to the east of their compound, I could not see any life around. No towns. No roads. But listening carefully, I could sometimes hear goats in the distance. 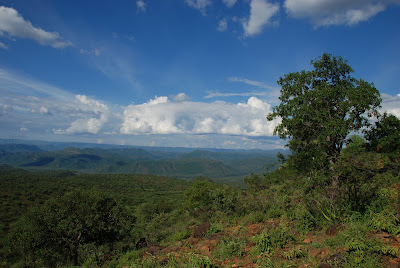 The view from the top of the hill: Rows upon rows of mountains and valleys. Till not too long ago, seeing zebras, cheetahs, kudu and other wildlife in these hills was nothing unusual. But nowadays, you can only find small antelope if you're lucky 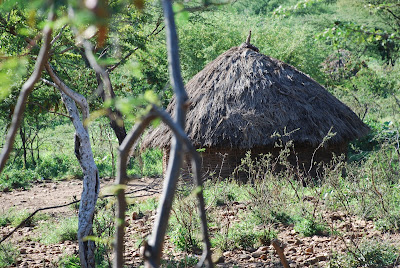 A Pokot home: The Pokot are nomadic pastoralists, and a sub tribe of the Kalenjin

And hiking down into the valley, I passed some homes which had been hidden among the trees. I continued the hike into the village of Orus: City center consists of two dukas (shops) and a church. I visited with villagers who were sitting in the shade. 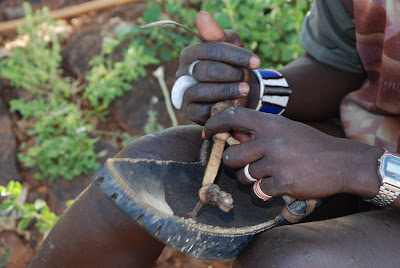 New and old: Arekwen is fixing his tire shoe. Despite being very traditional, most of the Pokot men wore watches. Notice the finger knife on his right hand

Visited is an overstatement, actually. Few spoke Kiswahili. And the little I speak doesn't yet amount to enough to make conversation about anything but the most basic. I took pictures and showed them what they look like. We laughed together and I wished I could speak more. I would ask them about their culture and about their lives. Arekwen (perhaps around 18 years old) showed me how they use their finger knives, and giggled at my appreciation for his shoes cut from discarded car tires.

I cannot imagine what it must be like to live like that. Not as a Pokot, nor as a missionary. The Pokot, after all, are used to very simple life. But as a Westerner, to have to drive three hours through rugged terrain for anything but milk, sugar, cooking fat, tea leaves, and maize flour, would be hard for me. Davis' aunt and I visited later, and she explained how they have always loved living in remote, difficult areas, working among unreached peoples. I am passionate about seeing unreached people hear the Good News of Jesus, but I know I would not be able to live in an area like that. 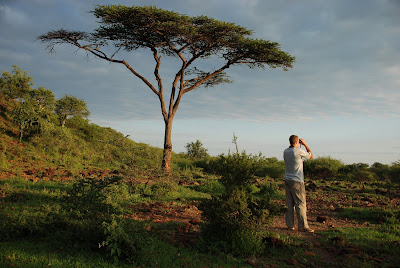 It was good to visit, though. I got up at daybreak both mornings and hiked for about two hours into the hills surrounding the compound. I joined Davis' ornithologist cousin Jeff on these hikes. Jeff and his wife teach at RVA near Nairobi, and happened to be visiting his parents for the week. (On our two hikes, we saw 30 different kinds of birds!*) 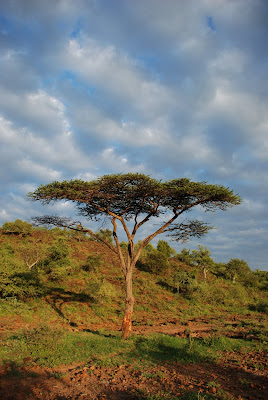 On Sunday morning, I opted to join Art, Davis' uncle, for a safari down into the next valley. He was to preach at a church where they're in the process of putting in a new well, and he wanted to check on the progress of the well. I hopped on the back of the pick-up and held on tightly as we rolled over miles and miles of rocky roads. Sitting quietly at the back of the pick-up was a young Pokot mom with her baby strapped to her back, as well as a teenage girl. Both agreed shyly that I can take their pictures and giggled at seeing themselves on my camera. 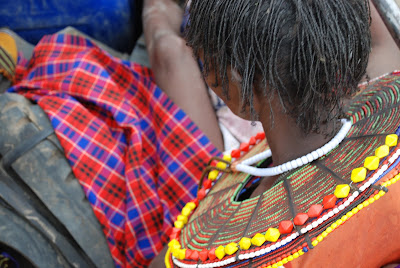 Young Pokot mother: The colored beads are only for married women. Single girls wear brown beads
As we finally pulled up the church, I found the last seat on the women's side: an oil can in the very back. But I preferred sitting there than squeezing in between the other women. It gave me the freedom to take one or two pictures during the sermon, and for kids to walk up and stare at me.

There were about 20 people in church, most of them dressed in traditional Pokot clothing. Babies wore no diapers, but instead, when the mom in front of me noticed her baby girl was needing to go, she simply positioned her in a way that the baby girl could freely urinate on the church floor.
During the entire service, the air was thick with the smell of my neighbor's beads: The women smear their beaded necklaces with a mixture of soil and cow fat. Young girls were staring at me, their hair braided into glistening strings. I found myself wishing I were a gifted sketch artist... 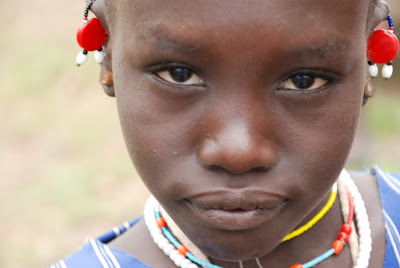 Notice the piercings in the girl's ears and the wooden spacers to stretch the cuts in her earlobes
Many children had little rows of scars on their tummies: Pokot tattoos, simple decorations. Girls had ear piercings both in their earlobes, and hang bright red beads dangled from the top of their ears. Many of these girls wore wooden spacers in their ears, cone-shaped pieces to wood to stretch their piercings. 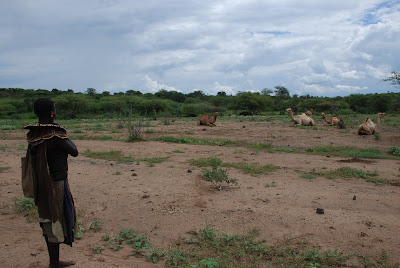 Pokot woman and camels
After the service, I walked around the area with one of the women as well as a Tugen pastor. Behind the church was a herd of about 30 camels taking a Sunday afternoon nap, it seemed. I was ready for one myself, but first had to go to the pastor's house for chai. The drive back up the mountain was filled with chatter from new passengers who decided to take a goat to the Davis' home in honor of Jeff's visit. That evening, we all shared roasted goat meat and closed the evening with singing worship songs in Kipokot, Kiswahili and English.

I walked to my rondawel that evening, pausing to thank God for the chance to see how fellow believers live in another part of this country. The stars filled the night sky in a solid blanket from horizon to horizon, all around. The milky way was a solid path from north to south.

"Thank you, LORD," I wrote to the light of a dim torch, "that I got to see your handiwork today not only in the birds, the hills and the stars, but also in the people of this land. Thank you for showing off your work!" 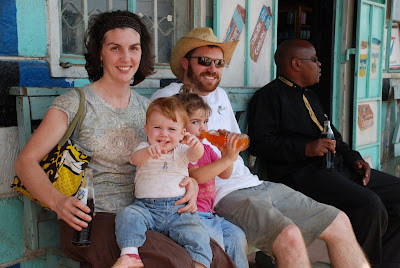