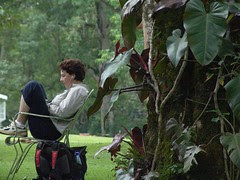 Living, working and playing in the same small compound can get confining at times. So when Raymond and Sarah recently told me they love to go away to spend time with God, I promptly invited them to Kakamega Forest.

And when colleague Phoebe from Kipkaren asked to visit this weekend, I told her we'd be going to the forest for the day, and she was game. But then Raymond and Sarah had to cancel at the last moment due to a funeral. And so I invited Kiki (an intern) and John (staff kid) to join Phoebe and I for the journey.

Though both Phoebe and John are from this area, they've never been to the forest, and they had a blast!

Click on the picture to see a few more shots of our outing. This picture, by the way, was taken by Kiki. She asked to play with my camera, and I had no idea she took a shot of me, reading.

Typically, when I go to the forest, I go to Rondo, a Christian retreat center. I usually go hiking in the forest and have decided I'm definitely hiring a guide next time and doing one of the longer hikes in order to see some of the shyer bird species which are deeper in the forest. (Leopards and hyena also live in this forest, but somehow I believe they're further to the south, far from any of the human activity since I've never seen any warning signs in the part of the forest where I've hiked...)

After hiking, I usually have lunch at the center, then spend time reading, journaling, worshiping or simply listening. There are immaculate gardens, including little benches right at the forest edge, and a small chapel.

I usually order tea and then watch the rain come in. In this part of the country, it rains almost every single afternoon.

I speak as if I do this every few weeks, but I've only been to the forest a few times, and this is the routine I most enjoy. And it's definitely one of my very favorite places to break away to.
The road to the forest, however, is not a very good road; there are long stretches with terrible potholes. Yesterday, I paid "toll fees" to three different groups of people who were voluntarily filling in the potholes. One such "toll station" was on the road that was leading right into the forest. The guys had actually placed rocks in the road to make traffic stop. They were filling in deep ditches with huge rocks, and I had no qualm with paying them for the work they were doing. I just know that I'd feel very uncomfortable coming upon a blocked road if I were alone in the car... And that's why I don't go to the forest every weekend. Because I need to take people with me. And because it's such a special place to me (and a 2-hour drive), I don't want to take just anyone. Selfish? Maybe. Smart? I'd like to think so. It's part of my self-care routine.
Posted by Adele around 2:16 AM