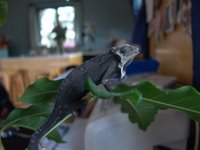 This morning, when I picked up Barra Barra to take him out to feed him, he looked sick. All over his little body, his skin seemed white. And no, he never turns white. Yellow. Black. Striped. Spotted. Brown. Never white. Upon closer inspection, I realized he's shedding his skin.

As I placed him back on his little plant by my desk, he started puffing up his body as big as he could and stretched his little neck as far as he could. It really looked odd. What he was doing was loosening the skin! A few hours later, his old skin lay on the ground beside the plant. He had a brand new skin, a fresh green skin! But in the hard-to-reach places, in the folds under his chin, around his tail which he simply can't puff up, the old skin remains for now.

It made me wonder about how we shed our skin, how we can allow God to remove the old and replace it with the new. Sometimes, though, despite all our effort, some of the old skin remains. Some old habits remain. They take time to shed as we continue to exercise and stretch ourselves...

As we look in the mirror of God's Word, may we be quick to see the areas where we're still needing to do more stretching. And that, truly, is a lifelong process.
Posted by Adele around 3:10 PM