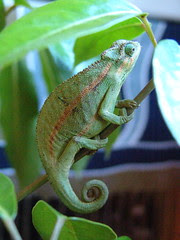 Since they left for the US, I asked if I could have him. He's now my official roommate and flyswatter. He's amazing, catching all the flies!

No more fly paper in the house. No more annoying flies.

He's a very quiet roommate with few demands. I just have to take him around to catch his food, and mist him every other day with water.

Kenyans are terribly scared of chameleons, so when I have guests, I have to put him in his cage...