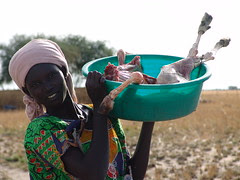 Mary
Originally uploaded by Boyznberry.
It's 3:15am. I've been uploading photos of the Sudan mission, but am stopping here to go to bed... I'll upload more tomorrow. Click on Mary's photo to see more. Each photo has a detailed caption so you'll know what you're looking at.

Some highlights for me:

Seeing God answer our prayers to heal Abiye. On Thursday, this young lady had NO pulse, NO blood pressure, and her extremities were like ice. The medical staff gave each other one of those looks that speak more than you'd like to hear. One said, "There's nothing more we can do for her. Let's just make sure she's comfortable [in dying]." She said later, she was switching to being a hospice nurse, not thinking the girl would make it. I took Abiye's cold hands in mine and prayed like I've never prayed for God to save her so her cattle camp (see below) can know GOD! Everyone else was praying too for God to save her. Today, she walked. She'll be going home tomorrow!

Sitting on my haunches in the kitchen hut around a fire, cleaning sheep intestines with Mary (the girl in the photo) so we could have a conversation about God... She is a believer, but can't really explain why she believes. She started going to church because she was attracted to the worship. We had an amazing conversation and I thank God for that opportunity! It wouldn't have happened otherwise. It was so hot in the little kitchen, Mary and the other Sudanese women were working topless. The Sudanese are VERY African! (It took lots of scrubbing and finally soaking my hands in bleach to get the smell of the tripe off me, but it was worth it!)

Spending several hours in a cattle camp. The Sudanese did NOT want me (and two Kenyan colleagues--men) to spend the night since it would've been too dangerous, but everyone obliged and we stayed from the time the cows came home till almost 11pm, observing life... The camp we visited has about 10,000 cows and 600 people. Some of the people have tarps set up as tents. One tarp becomes home to FORTY people when it rains! When it's not raining, the children sleep in the cow ash (ash from cow dung having been burned). I'll write more on my blog about this. They even brush their teeth with the cow ash! (I'm not kidding.)

Interviewing each of the orphans ELI takes care of... It was sad hearing their stories, but I was blessed knowing that getting their stories and photos means we can find sponsors so they can have better lives!

None of the team got sick. There were fewer mosquitoes than we were told due to the rains being late, but we had a lot of flies (including humongous tsetse flies--ouch!) The ELI staff worked like crazy to complete a little shower room and outhouse, so we didn't have to dig holes... They brought some water from the community wells so we could pour a few cupfuls over us at the end of the day to clean up. It was VERY, VERY hot (the thermometer we had couldn't read above 120, so it read 120 on several days). It rained only two days, yesterday being the worst. I'll tell more about that on my blog. We ate rice and beans most meals. There was also sheep and goat, but I didn't have any meat in order to avoid getting sick.

The medical team saw more than 1,000 patients, mostly for worm and malaria treatment. There were two cases of cholera. Many came to have teeth extracted. The 2 pastors on the team were able to do a seminar for pastors and community leaders which was well received. I was able to record teachings and preaching as well as worship songs.
Posted by Adele around 7:21 AM