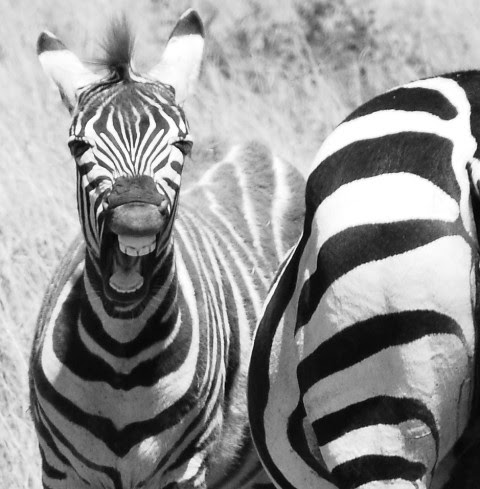 This week, after a chock full few days with a team from Iowa, I had the privilege of joining them on their debriefing safari. (Just so you understand: We strongly encourage all teams to go on a short safari after spending time in the boonies, so they can process that which they had experienced and consider the question, "As a result of what I've experienced, what does God want me to do?" If you simply hop on an airplane and fly home, the busy-ness of life back home often gets in the way of processing.)

This team invited me along for their safari. We had an amazing time of appreciating creation, of resting a bit, of processing, and of simply enjoying each others' company.

One highlight from the safari included seeing the crossing of the wildebeest and zebras. Millions of animals migrate between the Mara and Serengeti each year, and it was a true National Geographic moment, sitting by the river, waiting patiently until the first wildebeest took the plunge and started swimming.

Other highlights (for me) included seeing a Kori bustard, the biggest flight bird in Africa. I had last seen one in Namibia, almost 20 years ago! And seeing a pair of juvenile African fish eagles feast on a mud fish. It was amazing watching the eagles throw their heads back and utter their amazing call that seemed to echo along the river. Of course we saw lots of lions, too, and even four cheetahs. And we saw a black rhino, which is rather rare in this area.

Click on the baby zebra for a few shots from safari.

I'm back in Nairobi now and was able to get a hair cut today and get some rest. My day tomorrow is filled with some Nairobi meetings, plus I get to meet a new team and take them to Ilula and Kipkaren for a short visit.

I hope to get caught up on lots of work this week. That's life, eh? A constant catching up. It's nice to have had some time away in the midst of all the hustling, though.

Some of you had commented on my previous post on my neighbors with the twins. Our community in Kipkaren is standing together and helping out the mom and her children. Someone has also offered to help out specifically with providing money for food.

It's been humbling to watch both Kenyans and international friends step out to help out. Sometimes, the needs that surround me can be overwhelming. It's at times like those that I can but remind myself that it is not for me to try and solve the problems. I simply need to obey where God is leading, follow Him in the work He's already doing rather than get in His way and try to take things in my own hands. But at the same time, once again, to obey when I sense Him asking me to do something that's far bigger than I am.

That's life in Kenya, I'd say.

It's an adventure, and God's the guide. I love that!
Posted by Adele around 9:32 PM