About Funerals and Card Games 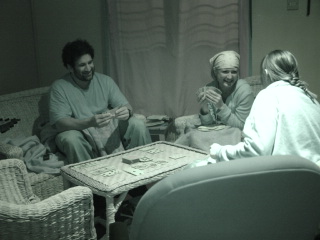 It's way after midnight.

Tonight, I played cards for the first time in months. I love playing cards with friends (Canasta or Hand and Foot), and after coming back from the funeral, found some of the visiting team members to be playing Hand and Foot! So after they had gone to read to the kids, some came over and we played. Unfortunately, we were all pretty wiped (and two of the guests are fighting colds) so we weren't as competitive as we could be, but it was lots of fun, nevertheless. 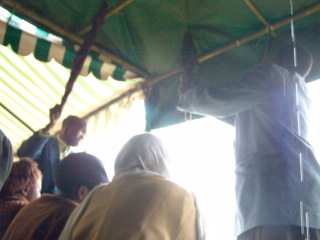 Today's funeral was very different from any funerals I had ever attended. To begin with, it started two-and-a-half hours late, partly because it was raining, but I think mostly simply because it was on "Africa time." We were there in time for the 10am program, and waited till after noon.

The funeral was held right at the person's home. They had set up shelters outside, and many of the tarps had holes in them, so every so often, someone would get up and start poking the tarp to let the water run off. With that going on, it was hard to follow the speeches. And there were many. 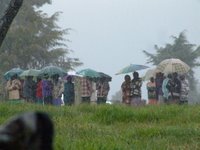 Only ONE family member was assigned to share, and he just read his mother's history. Next followed a slew of "chairman of the local elementary school" or "assistant chief of the district" and so on. Very few really shared personal stories. (Perhaps I just missed them because of the rain being chased off the tarps.) There wasn't enough shelter for everyone, so a great number of people ended up standing in the rain for the duration of the funeral.

Then followed a fairly long sermon (again, very impersonal), and then the viewing. 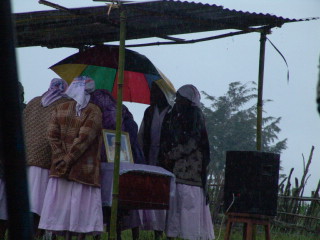 First, the ladies from the church's women's fellowship surrounded the coffin, then people lined up and filed past the body. Next, they were to carry the body to the grave which is right on the family's property. This particular tribe (the Kalinjin) bury their family a little way from the home. Others (like the Luo and Luya) bury them right by the door.

We didn't attend the actual lowering of the coffin since there was very little space and many people. The grave first had to be emptied since it had a lot of rain water in by then.

It is a tradition for people to really cry hard (truly wail) when the coffin is lowered. The pastor, however, encouraged people to consider the fact that though they are sad to have lost Maria, that we are to rejoice in the fact that she's gone to be with the Lord. So as we left, I saw the guests gathered at the grave with no wailing to be heard.

I am glad to have been able to support the Rono family by attending the funeral of Laban's sister. I just was saddened by how impersonal it all was. Perhaps a great part of it is that the Kalinjin say that one should not cry outwardly. "Your tears should go inside," one colleague often reminds visitors.

I don't want my funeral to be impersonal someday. I want it to be a celebration! If people want to cry, they may. If they want to laugh, that would be OK, too. I'd want them to be wearing bright colors to celebrate that I've gone to be in a Better Place. I don't want people to be looking at a body in a casket. I'd rather be cremated, especially since chances are I won't die in my home country... (My ouma (grandma) didn't like it when we talked about death or funerals. She'd have a fit to see me telling the whole world how I'd like my funeral to be one day!)

Lala salama, when you get to it.
Posted by Adele around 4:16 AM