Today, I had a fight with a gun-wielding soldier 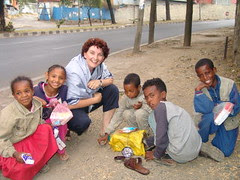 Street kids
Originally uploaded by Boyznberry.
Today, (1/14) I had a fight with an Ethiopian soldier. Literally. Hand-to-hand combat! He tried to grab my camera from me, and I fought him off. I refused to let him take my camera! Here’s what happened…

Sue, Mary and I decided to explore Addis. We left our hotel with lots of energy and decided to simply walk around. Due to my experience the other day (see my previous blog entry), I knew where the Menelik II Orthodox Church was, so we headed in that direction.

One encounters many, many beggars on the streets here, as well as children who either just beg or sell gum, tissues or post cards to make a living. Rather than give children money, we bought bread rolls which we carried with us and handed out as we saw fit. Soon after leaving the hotel grounds, we saw a young boy with the most beautiful smile. His name was Abraham, and he really didn’t want bread or anything from us. He was simply walking, looking for a good spot to set up his business—shining shoes. He’s 11.

We really didn’t know the exact way to the Hilton Hotel (which in turn is close to the church we were planning on visiting), so Abraham was showing us the way. As we were walking, more children joined us. They were talking more with Sue and Mary (even singing Christian songs) while Abraham and I were talking about football—the most common topic for small talk once Africans find out I’m from South Africa, the land of Bafana Bafana.

Aaaaanyway, Abraham suddenly said, “Could I shine your sandals for you? They will look more beautiful than ever!” I figured, No problem, I would have paid the kid in any case for showing us the way, and my sandals were dusty from the walk by then. “Sure!” I said. He promptly sat down and took out polish and brushes from the wooden box he had been carrying with him.

Of course, being me, I had to take a photo of my new friend Abraham cleaning my shoes.

It just so happened that we had stopped right next to a high wall, which in turn just happens to be the wall surrounding the National Palace, where the Prime Minister lives. And, despite the fact that there were ABSOLUTELY NO SIGNS that photography is prohibited, it’s here where the soldier came up to me and literally grabbed my camera from me.

And I fought back.

When he realized that this “chick” was not going to give up her camera, he said, “Wait here!” and left. The kids had scattered the moment he approached us, except for Abraham, who was still shining my sandals. This kid was determined to make a few Birr doing what he does well!

The soldier came back with another soldier who could speak a little English. “Give me camera!” he demanded. I said no, I’d show him. I continued to show the man the photo I had taken, and then showed him that I am deleting that specific photo. But they’re not used to digital cameras, so they still wanted to take my camera to rip out the film! I refused to let them touch my camera! “I’ll show you,” I explained.

Poor Mary and Sue were standing there praying! And while this bizarre episode is unfolding, I was thinking a number of thoughts.

When the guards were satisfied that the photos on my camera did not include any of the wall, they finally let us go.

My heart was pounding! Those of you who know me well know that when I get excited/tense, I start shaking, so you can imagine how I was shaking!

The rest of the day, we walked around and I was really careful where I took photos. In fact, I took VERY few pictures at all, fearing that a soldier might jump out from somewhere and try to grab my camera.

I did manage to buy some beautiful Ethiopian musical instruments! I bought a karar, a guitar of sorts used by the Gambela people. I also bought a mashinko, an Ethiopian violin. And I bought a pizza-size coffee table used by the Jima people. I’m happy with what I can take home to my hut in Kenya. (Click on the photo on my blog to see photos of these instruments.)

That’s it. We’re being taken out by Badeg, our Ethiopian host tonight. I’d better get ready for that!
*************
It is now 10 p.m., and we just got back from our Ethiopian dinner. Ethiopians do not used utensils to eat. Instead, they used only bread (called injera) to pick up everything on their plates. The choices were spicy chicken stew, not-so-spicy chicken stew, tripe, spicy chunks of beef, not-so-spicy chunks of beef, and a gamut of other meat dishes (including chicken liver and other beef dishes prepared in various ways). Oh, and eggs, boiled in the chicken stew. And some salads, for the Westerners, since salad really isn’t an Ethiopian dish.

A waiter comes to your table to wash your hands, and after you’ve had your hands washed, you’re not supposed to touch your hair. That’s a big no-no. (Though I doubt it will result in fighting off a soldier.)

And during this whole time, a band was playing African drums, karars and mashinkos. There were also singers and dancers, depicting bits and pieces from different Ethiopian tribes. I really didn’t enjoy the dancing, but it was one of those cultural events you simply have to experience.

Ethiopia has 80-some different tribes, so the dances varied from styles similar to that of other African people groups to some that were unlike anything I’ve ever seen. The most bizarre one was a dance where the girls spin their heads round and round and round until you wonder if their spinal cords are still in tact. Seriously! I didn’t enjoy watching the dances, plus smoking is allowed anywhere and everywhere in this country, and the smoke probably was getting to me, too.

Perhaps I would’ve enjoyed this cultural event more had it not been that I had walked no less than 10 miles today and been accosted by a soldier.

Tomorrow, we are going to an Amharic church service.