Today had several reality-check moments for me. One was a conversation with a colleague in which he was talking about some of the deep issues Eldoret is still facing. It was disturbing to hear how fragile our town still is.

Next, I read through piles of letters written by our kids from Ilula about things they saw and heard during the post-election violence. Though they've been through post-trauma counseling, some of their notes still showed how uncertain they felt about the future. Here are just a few comments from the letters (the rest will be printed in a children's home newsletter) as well as a picture drawn by one of the girls. If you look closely, the people in the picture are shouting "Uuuui!" That's the distress call in Kenya. We had heard it much in the past few months (I didn't hear these cries as often as my friends who didn't get to go away.) 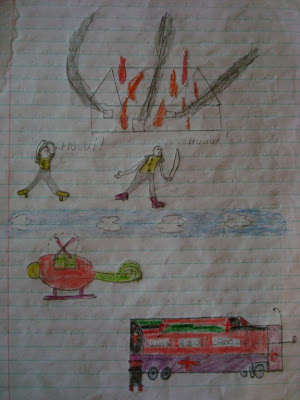 "You could see many people killing each other without compassion. They could not even have mercy on a young child. If you could be found you would be killed without compassion. We were always scared of being attacked by the enemies. At night we could hear the yelling and after yelling we could hear the bullets and we were very afraid. Our parents were standing guard at night to make sure we were safe. By now, we do not know what will be next. We have never seen violence like this in our lives."

Another child wrote, "GSU [general service unit – similar to riot police] came with a big lorry. They told us to go into our rooms and keep quiet and close the windows. After some time we heard that people are dying. The police were closing the roads and shooting guns. Helicopters were flying over taking pictures of houses burning. I thank God for stopping the war."

And yet another girl said, "Just twenty minutes after supper we started seeing red all over because people were burning houses and damaging things, and you could see people running away from their homes to other people’s homes, only to find no peace there. We had to stay in our rooms from morning after breakfast, then go for lunch, go back to our rooms. We could not even have devotions together in the gazebos. We were like refugees in our own country."

Then, this evening over dinner with friends, the conversation inevitably turned to the situation around us. Though things are calm, there's not yet peace. Deep issues still need to be dealt with.

Tomorrow, we'll be going to the Msafara prayer meeting in town. As their Web site explains, "Msafara Wheels of Hope is a church initiative that will act as a catalyst to lead the country into spiritual cleansing and bringing hope to Kenyans." You'll also want to check out their blog as well as the blog of one of their key pastors.

Read the entries on Eldoret for some insight on the issues in our area.

The road ahead is still long.

It just started raining outside. A soft rain. We need rain badly. I'm praying that tomorrow's meeting will be like the rain that is starting to fall, quenching the parched land as it's being prepared for another season of planting.
Posted by Adele around 2:44 AM