Kiddos, and life around the neighborhood

For those of you who know Ezekiel and Noella, or remember my blog entry about being present at Favor Kiplagat's birth, here's a photo I took of him this morning. 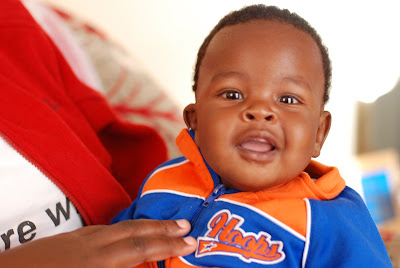 Isn't he beautiful? I'm convinced that he remembers those first 30 minutes or so of his life when I held him and told him what an amazing young man he's going to be...

From his house, I headed to the clinic, passing Brenda and Victor along the way. 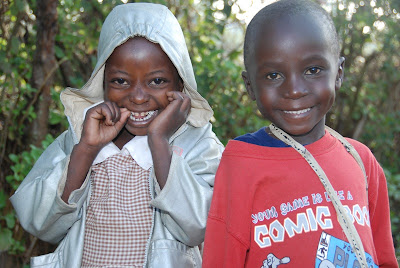 (Brenda is Mama Sifuna's kid, for any of you who've been to Kipkaren. She has her mother's smile and spunk.) These two were just heading to the duka (little shop across from our gate) to look for their teacher. They go to the local nursery school. By the time I came back from the clinic (and various other visits along the way), they plus at least 6 others were hanging around the duka. Perhaps their teacher decided not to show up today? That's pretty scary for a 1-classroom school! (Just to clarify, that nursery school is not part of ELI's school...)

I headed up to the clinic, passing this line of safari ants... 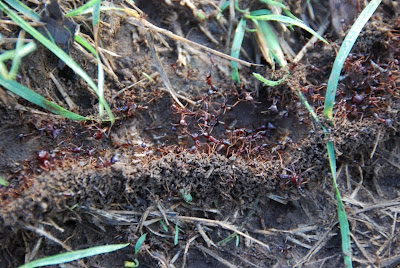 I'm glad I saw them before I stepped on them! They are vicious! In fact, they have such a strong bite that they're used traditionally to suture wounds! I cannot imagine what that would've been like. And how many times the nurse would've been bitten himself! (I've heard horror stories of little ones being devoured by them, too. Whether it's true, I don't know. But it's possible. And it's kept me from stepping on safari ants!)

Heading further up the hill, I simply had to take this picture of our neighborhood. 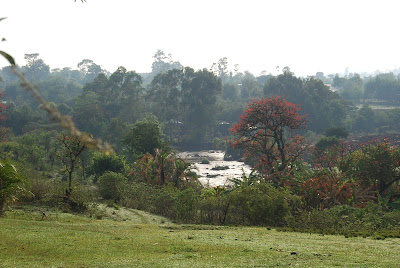 The rainy season has obviously come, washing away the dust from the trees and the grass. Those are Nandi flame trees on the right. Follow the river and you'll see roofs among the trees. Those are new guest housing being built on our compound. My house is about 100 feet further down along the river.

Next stop: The clinic. Took some shots of the staff there, and on my way back to the center, stopped by several homes to greet neighbors. Because it's the right thing to do. 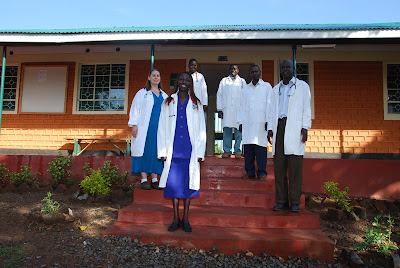 It was lunch time before I could settle in and start my "real" work for the day. But that's not true. The photo sessions--the first one of the day being at 6:30--were definitely part of my job. And visiting with neighbors? If you simply zip by and not take time to visit, there is absolutely no way these people will respect you enough to lend you their ear when you do have something more to share with them.

It's all part of ministry in rural Kenya. It's part of "earning the right to be heard."

Life in the bush. Got to love it! (With that, it's back to the books for me. And dodging flying ants! Inside my house, yes... They're getting in through the crack under the door, or something! But there're more and more coming. Michelle just called. Their house has been invaded by hundreds! Where's Betty when you need her? She'd love to catch 'em and fry 'em!)
Posted by Adele around 10:37 PM