I love my buddy Manoj. In 1987, he and I were exchange students at the same school and the same Rotary club on Long Island, NY. 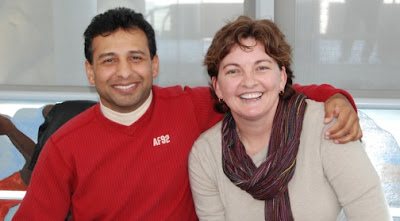 And on Sunday, I saw him for the first time since August of that year, when he returned to India. The short 2 hours we had to visit wasn't nearly long enough to catch up. Granted, we've chatted on the phone in the past year, but to sit face to face and visit about the impact a year abroad had on us as teenagers, was a blast.

What cracked me up, though, is that the very first question the inquisitive Manoj asked (on behalf of his wife and daughter, since he couldn't adequately answer them) was, "Are you a nun??"

When I explained that I was indeed not a nun, but had been a missionary, he asked a poignant question that exposes our dual lives as Christians. "Wait! So can you choose not to be a missionary any longer?"

"Ah, actually," I explained to my dear friend, "you can't. At least, not the way I see it. What I mean is that I will no longer be paid by people in a church to do what I did, but get a salary. I'll always be a missionary at heart."

Manoj equated it later to his thoughts on being a husband a dad. "I'm not fully me without my wife or without my daughter. They're such a critical part of who I am now..."

We didn't get to explore the depths of all of our various thoughts. If we had, we would've sat there for many more hours. Instead, I had a plane to catch, and Manoj and I promised to get together again, so I can meet Medha and Sannika, of whom he speaks with so much pride and joy.

As I walked through security, I had a huge smile on my face and in my heart. As had Manoj (though, if you know him, you'd know that he is one of the most outgoing, friendly chaps around).

Having moved so many times in my life, I have few friends who go back so far. Hence, sitting with a pal whom God used 22 years ago to open my eyes to the realization of how wrong my country's racist policies were (remember, it was 1987, Mandela was still in prison, SA was still segregated), did my soul well.

But as I pondered on our conversation during the 14-hour transatlantic flight, it struck me again that Manoj never forced his ideas on me when we were younger. (Nor does he now.) But by being his vivacious self 22 years ago, he had a profound impact on the way I've looked at people of other races ever since.

For that, I am thankful.
Posted by Adele around 5:38 AM