All in a day's work

After staff devotions today, I headed to town to a) take a visiting couple to transfer to Ilula, b) take the intern for his shopping day, c) sell my wreck, and d) buy a car.

The day was full of surprises, but bottom line, my Land Rover is no longer my Land Rover. It now belongs to a colleague in Ilula who has the courage to fix it. And I now have a 22-year-old Peugeot station wagon. The engine's good. The body's OK (just a few rust spots). The brakes need fixing (which is something I discovered when I went to test drive it), and due to hiccups along the way, I couldn't get insurance this afternoon, so I left the car at our office for the night.

I hope to take it to the mechanic tomorrow to have the brakes fixed, but don't think I can drive it back here yet. Not in the mud. It won't handle our roads in the rain... But it'll do fine during the dry season, which is around the corner. It is what it is. It's what I could afford, and I'm trusting it'll work just fine! 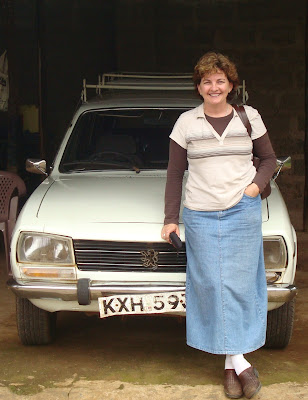 When I finally got home, I found blood spots around my house, and discovered that Toulouse (my cat that's not really my cat - she used to belong to colleagues who gave her to another colleague who gave her to other colleagues but then she decided she wanted to be a wild cat and finally decided she's moving in with me, just basically to eat, hide in a corner, and growl at her former BFF, Flannel) was bleeding.

I Googled the condition, and first thought it might be pyometra, a uterine infection. But the symptoms didn't all line up, and after I had thrown her out the door and she did a very uncharacteristic thing by crying at the window to come in, I let her back in. She made herself at home on a duffel bag (her favorite sleeping spot) and kept licking herself... She was now bleeding more and more, and soon started producing more than blood. In fact, she had a miscarriage. She delivered 3 fetuses, one of which was still perfectly in its little sac! They're all of an inch long. (Don't worry, I don't post the photos. And of course I took photos before discarding them, just in case.)

Unfortunately, there aren't vets around that can spay the cats. I've been giving Flannel hormone shots which I got from a vet in South Africa for birth control. But the shots are incredibly painful and sends her into stress for days.

As for Toulouse, I hope she'll do OK... She seems at peace right now. It's almost 10 pm. I was planning on reading a book tonight, but am wiped. Hopefully I can skim at least a chapter or four before calling it the night.
Posted by Adele around 1:33 AM