Yesterday, I took a visiting team to our AIDS campaign nearby. I saw this kid wearing this T-shirt which I thought was pretty funny since he'd have no idea what video games are... 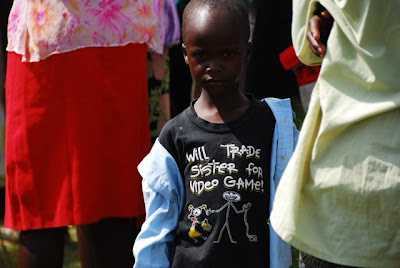 The sky was a dark, dark gray, and not wanting to be caught in the heavy rain storm, we left before the event came to a close. I was particularly anxious to get home since I knew that the vehicle I was driving (one of our ministry vehicles), was less-than-perfect for the muddy roads, and as it were, the roads at our center were a muddy mess from several other 4WD vehicles having gotten stuck the night before. When I pulled into the center about 30 minutes later without having gotten stuck, I praised God from the depths of my heart.

This morning in church, Dennis came and crawled up on my lap. The children sang their hearts out and danced and danced for hours in worship (I'm not exaggerating). It really was good to be back in church.

This afternoon after lunch, I baked some cookies and took it over to the new team gazebo by the river. 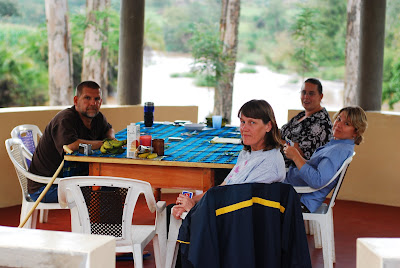 Every so often, we'd watch a child or a grandma cross the river on foot. The water is getting dangerously high (up to waist-level for the kids), but the reality for them is that they'd have to walk a mile or so to get to the nearest bridge. 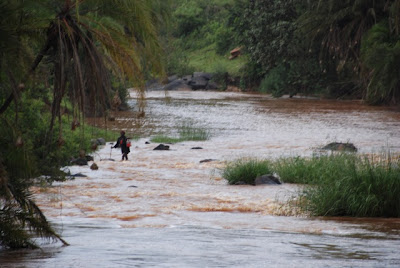 This gazebo is my new favorite hang-out spot! It's perfect for early-morning times with God... The team and I (with Michelle) played a round of Phase 10. It reminded me of the night after the attack on my car, when we girls got together to play Phase 10 and diffused some of the tension through lots of laughter.

"What attack on your car?" you might ask. While I was in the US and talking about some of the events that transpired at the start of the year, I remembered that I never posted the story on my blog due to the sensitive nature thereof. So, just so you know, I'll post an excerpt below from an e-mail I had sent friends.

But before posting it, I want to make it clear that things are fine here now. I'm thrilled that our community is talking about changes that need to happen within the church (i.e. in our community's hearts, not the corporate church).

It's bizarre to even think that these events were such a reality just a few months ago. But the evidence of the clashes remain in burnt-down houses and tented camps along the road which never used to be there... At least the remains of the burning truck to which I refer in the letter was finally removed from the side of the road last week.

Today was one of the scariest days in my life. Or perhaps THE scariest one ever.

Everything seemed peaceful this morning. So much so that our director called and asked if I'd like to go to town. He knew I needed to draw money. (The lady who helps clean my house has no other source of income. If I don't pay her, she literally cannot buy food. So I needed to go to the bank.) I agreed to drive.

The road to town was somewhat normal. There were about 3 vehicles still smoldering from unrest 2 days ago. But all the roadblocks were out of the way. Things seemed as normal as it can at this time.

In town, everything seemed truly normal. I went to the bank and did a few other errands, like stocking up on cat food and buying groceries that would last me a while.

Then I went to Tusker's to wait for the rest of the group. As my colleague Michelle and I were sitting in the parking lot, chaos broke out. People were running everywhere. Police came charging down the road. A man ran to my car shouting "MOVE! YOU'VE GOT TO GET OUT OF HERE!" But I couldn't. The rest of the people were in the shop, which had been immediately closed. So we locked the doors and waited.

David (our director) came running. "Get in the back!" he shouted. I moved. But we weren't going anywhere. The rest of the people were still in Tusker's.

Slowly, the chaos died down. News came that an opposition MP had been shot right in Eldoret, by a policeman! Then emergency calls started, with people shouting, "Ooooooo-wi!" That's the way they shout when there's a crisis. These cries were for people trying to steal street vendors' goods. We sat in my car watching opportunists trying to steal from vendors and others chasing them... We could do nothing but wait and watch and pray.

Finally, the rest of the group came. About 12 of them, I think. And everyone had LOTS of supplies. We tied one bag of school supplies (worth about $100) onto the roof of my Land Rover, along with a metal trunk for one girl's move to high school next week. Plus 2 mattresses, for that same girl and one boy, for school dorm. EVERYONE crammed into the car. I don't know how, but we did.

But then we managed to finally get through on the congested cell phone network to our second driver, who was elsewhere in town trying to reach us. He returned and took most of the people while 5 of us stayed in my car plus all the supplies were still with us.

We stopped on our way out to fill my tank with diesel (in case we may have had to flee by car later and would need fuel). Then, at Mayine, a little town right outside Eldoret, things were BAD. (For those of you who've been here/know the area, it's when you pass the first Muslim mosque on your right.) A truck was on fire right on the road. "We've got to keep going," David said. There was no way we could turn around. He had to drive right into the mob.

And then we were surrounded by what seemed like hundreds of angry men. David had his window down just a bit, trying to tell them that we're from the area and we work with orphans, that we're Nandis, that they should let us through. Meanwhile, people were banging against the car, hitting the windows with what sounded like iron pipes!!! I literally sat with my arms in the air praying out loud for God to protect us from the evil that surrounded us. As I was sitting in the passenger seat, people are banging against my window too, shouting for me to give them money. I looked right into the eyes of a man standing in front of my car with a football-sized stone, ready to throw it right at me. I just prayed!!! David told one of the guys, "Tell that man not to throw the stone at us." The guy said, "Hey, don't hurt the bishop!" He knew who David was. So the guy didn't throw the rock...

Guys had climbed on top of the car in the meantime and got the bag of school supplies and both mattresses.

When the men started shouting "Burn the car!" and "Give us the white girls!" David just started driving, because you could FEEL the heat from the burning trucks which were about 10 feet from us. (I honestly believe God opened a path through the mob. There's no way we could just get through!) Then we heard one rear sliding window break, and next, a pomelo-sized rock came through the rear window. There was glass all over, but no-one was hurt. Not even a bit. (If there were people in the back, it would've been different!) David went through about 3 more road blocks like that, just telling the guys in Nandi, "What are you doing?? We're just going home!" When one guy came at the car with a pick axe, David said, "Don't hurt the doctors!" The guys assumed we were medical doctors and said, "Pole!" (Sorry!) But you could just see the evil in people's eyes. It was scary!

As soon as we could, we got off the main road and took back roads. We must've passed through another 20 road blocks easily! There were signs on the road blocks saying things like "STOP. ODM ROAD BLOCK." But now we were in Nandi country, and people knew David, so we were let through everywhere. It was still scary, though. At one place, guys came at the car with bows and arrows, and more rocks, of course, and machetes, but David just calmly talked us through all those blocks to the point that everyone wanted to shake hands with us in the car!

By the time we were about 5 miles from home, the side window fell out. It had been completely shattered. The rear window just has a big hole in it and is completely shattered, but it's still in place. There's not a single other scratch or anything on the car!

I can honestly tell you that I had NEVER been so thankful to pull up to our center!

I KNOW that I know that I know God protected us. BIG TIME. How else does a mob bang on your windows and only ONE window shatters from the banging, but doesn't break and allow the guys to loot the car?? (The rear window was different. It was a rock thrown from further away. But it didn't hurt anyone!)

The second car reached home shortly after us, having gone through a lot of stuff but nothing quite like our ordeal.

Tonight, I thank God for his protection.

I stared evil in the eye. I hope I never have to go through anything like this again.

I am not planning on going to town again at all until I have to leave for Ethiopia for class later in February. When we're in the village, we're safe. But please, please keep praying for God's protection on us, and on every vehicle.

Today, 5 months after that terrible day, I praise God that deep changes are occurring in our community, and that we have not lost hope since we have not lost faith in Christ. As a community, I believe we're walking through this and coming out stronger.

It's been an eventful year so far. One I won't forget easily, I'm sure.
Posted by Adele around 2:58 AM