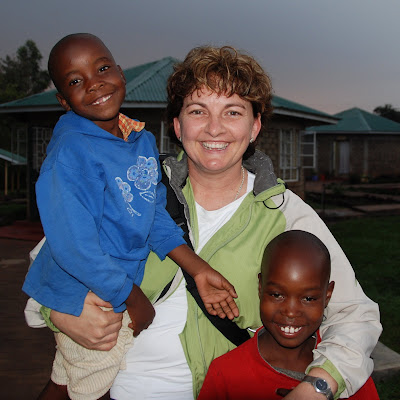 It's after 11 pm, and I just got in a little bit ago. I spent much of the afternoon at the children's home, visiting with the parents, and greeting the kids. I must've hugged each and every one three times, at least! And there are about 100 of them, yes.

Patrick was eager to show my his new puppy. Dennis just woke up from a nap and gave his signature chuckle as I held him. Viola wanted to hold my hand the whole time but realized quickly that it just won't work when I'm hugging so many kids. (They're the ones in the photo with me.) Little Brian (a 2-year-old biological child of one of the sets of parents) grinned from ear to ear when the kids asked, "Uyu ni nani?" (Who's that?) and he'd exclaim, "Adele!"

Needless to say, it was wonderful to see the kids again. But when the bell rang for devotions, they scattered as fast as they appeared, happy to hear what the visiting team has to share. Then came time for dinner, and as they headed to their individual gazebos, every child that passed by had to stop for another hug. I didn't mind at all.

Then I headed up to our director's home. They had started small groups a week ago, and I'm in the group that meets at his house. We were gathering at 7:00 for dinner and small group. "We're talking about the challenges that single moms in our community face," I was told.

Honestly, I wasn't excited about the prospect of dinner with a large group and long conversations, especially since it was all in Nandi, and I hardly understand a word! (I can follow some of the conversations in Swahili, but none in Nandi.) I went to sit by my friend Emily who translated as the group of 21 adults (a small group?) talked about the challenges single moms face.

We had to wrap things up three hours later (since we're leaving for an AIDS campaign at 7:30 am). But I was completely ready to continue the conversation! I am in total awe of what transpired tonight!

The single moms explained the challenges they had with raising adolescents on their own. But even married families concluded that they faced some of the same challenges. They concluded that the problems after the elections didn't only come from single families. Youths from normal families, too, were burning down homes.

By the end of the 3 hours, Pastor Helen (Cosmas' new wife!) had hit the nail on the head by saying that the church is teaching irrelevant messages, that some of the changes should be made from within the church, but that we as Christians, too, should take responsibility and make changes in our own lives! "What did YOU do differently this week? We talked about some of these things last week, too. Did you make any changes?" she asked people bluntly.

We talked about headship, about the role of fathers (one man said, "Do we as men really know what it means to be the head? We need to go back to Scripture!"), about submission and seeking to live as people created in the image of God, and what that looks like. The men committed to reach out to the children from single-parent families, to be role-models to them.

And we prayed. Everyone was on their knees on the floor, praying for our community, for God to bring healing, for him to show us what it truly means to be his followers...

I cannot begin to tell you how tonight's conversation touched my heart. The issues we talked about are issues I've been praying about for a year, that God would bring them to the surface. And when things fell apart in Kenya at the start of the year, I thought, "How can it be that a community that is supposedly predominantly Christian can break down like this? Will we realize that our faith has to penetrate the chore of our very beings and dictate the way we treat our neighbors, even if they're from a different tribe?"

I decided at the time that the only good that might come forth from the violence would be for the church to realize we're doing something wrong. But in the past few months, while I was away, I started fearing that things would simply go back to normal, that nothing will really change.

Tonight, I stood in awe of a God that is stirring up deep issues in people's hearts, and of a community who is willing to take a look at what life with Christ should look like.

The road ahead is long. And as Helen had said rightly, we can talk and talk and talk, but unless people (myself included) go home and actually make the changes God is asking us to make, the talking would be in vain.

My day started with Jeremiah 29:7, and ended with it again. I'm praying that God would show me how to live out the meaning of this verse, and I pray the same for you:

"Seek the peace of the city where I have sent you... and pray to the LORD on its behalf, for in its welfare you will find your welfare."

As I walked home under the stars, slipping and sliding in the mud, my heart was rejoicing. And then I heard little voices coming my way... The kids had been at the training center, watching a movie and dancing to music made by the Salvation Army Band who's here for tomorrow's AIDS campaign. One by one they stopped again, hugging me with some saying, "Adele. Lala salama. We're glad you're home."