Today truly was a day of celebration. I was having a relaxing time on the gazebo, having breakfast and time with God, when I got a call from Wilson, one of our AA pastors. "Adele, can you come now?" I knew they were doing baptisms in the river today, but thought it would be after church, not before.

"I'll be right there!" I assured him and quickly changed into a skirt and grabbed my camera. By the time I got to the river, there was no-one except a young boy digging dirt from the river bed, one tedious bucket at a time. I enjoyed the peace and quiet of the river, and then a huge group came walking down the hill. We sang Kalenjin hymns, and six men and women were baptized. 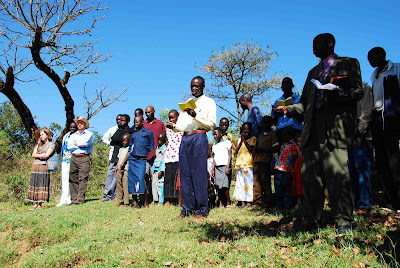 Some friends joining in the celebrations 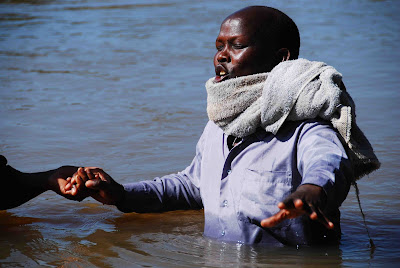 Stone, one of our AA pastors, praying
Though it was already half an hour into official church time, I headed home to take a shower, and by the time I got to church, we were still singing. In fact, at that stage, a group from the children's home was up front. Dennis' eyes shut immediately in his typical little smile the moment he saw me, and when they went to sit down, he looked at me as if to say, "Can I come sit by you?" I gestured for him to come, and he curled up in my lap, quietly listening to the sermon. I explained to him afterwards in my limited Swahili that I'll be going home this week to South Africa, and that I'll go to see my family and come back in 2 weeks. He gave me a big hug and ran off to the home for lunch.

No sooner had I walked into my home when I got a call. It was Stone and Wilson, telling me that there'll be a burning later in the afternoon, and if I can please come to take pictures. Some of the men and women in the group of 15 recovered alcoholics wanted to burn the tobacco and snuff they had as a sign of it no longer having a grip on their lives. 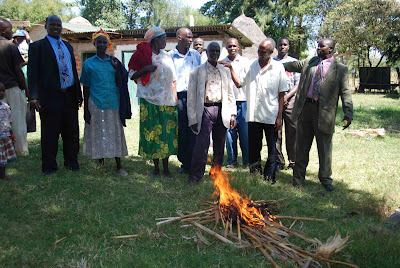 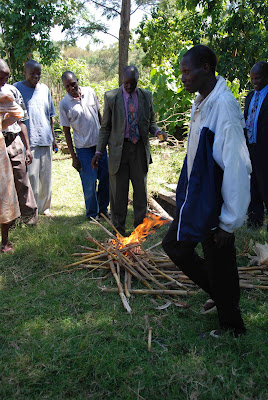 One of the most moving sights of the day was to see Baba Chiri (above, in the blue and white jacket) interacting with his group. He's the husband of my neighbor in Ilula, and has been an alcoholic for 18 years. Mama Chiri loves God passionately and has been praying for her husband all these years. He was not interested at all in going to our rehab center in Ilula.

But a month ago, when the Iowa Team was here, Mama Chiri came to the women's meeting. When she went home, she told her husband there's also a special men's meeting going on in Kipkaren the next week. He said he'd come. That Monday, though 300shillings would've been enough to get him all the way from Ilula to Kipkaren, he insisted that his wife give him 500. She didn't want to argue and risk having him change his mind. So she gave him 500 (a large portion of her weekly wage) and got a call hours later. He was lost. He had stopped along the way and got completely drunk. And then someone took his money while he was in the matatu, so he got kicked out of the public minibus.

Through a series of events that could've only been orchestrated by God, he still made it to Kipkaren that night, only to find out it's an AA program! He insisted to go home the next day. When Wilson called Mama Chiri to tell her the news, she asked several friends to pray. "Even me," she told me on Saturday, "knelt down right there on the side of the road and prayed for God to change Baba Chiri's heart."

It's now a month later, and her husband's heart has been more than changed. His life has been changed! His wife and children are all coming for his graduation on Tuesday. I cannot wait to hear him share first-hand what God has been doing!

I've uploaded some photos from the wedding on Flickr, by the way. One of my favorite shots of the day is the one below. Of course there are many more dignified pictures. This was a fun one. Just because. On that note, I'm going to go to bed. Time to rest. Tomorrow is yet another full day. 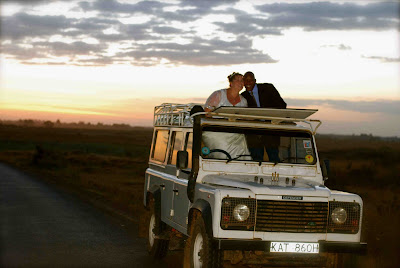