I've been doing work in and around my house this morning and decided to plant some new seeds in my garden. This required me to get my watering can, which just happened to be the perfect spot for some evil-looking snake to be taking a nap. It's not too big, so I didn't get a huge fright. But I wanted to get a picture of it, so I put the watering can down again (though not on top of the snake where it was) and went to fetch my camera. When I got back, the snake was gone. I saw it slithering in under my drain cover, though. So now I'm waiting for Davis, my herpetologist neighbor, to get home so he can identify it and see if we should kill it. (We don't kill non-venomous snakes since they eat rodents.)

When he lifts the cover, I'll take a decent picture of it and post it here!

Umm. Not possible. It disappeared. According to Davis' snake book, it could be a viper of sorts. But it also could be a baby python. Davis believes a python is more likely to have gone into a wet drain than a viper. Which makes me feel OK. I'm not afraid of a baby python. A viper, on the other hand...

Here's all I could see of it before its final disappearance. 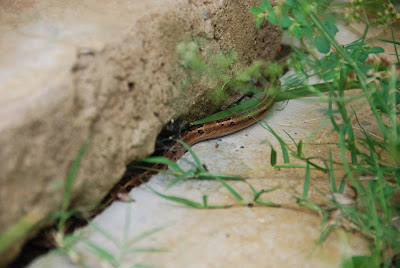 Posted by Adele around 4:54 PM