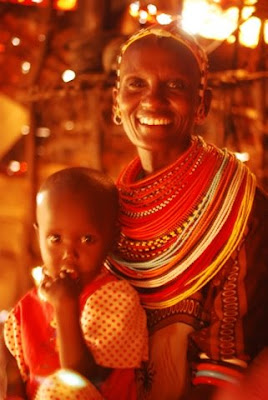 Nariyo’s smile lit up the entire ghop. I was sitting next to her on the cow hide reserved for ladies. She and her four daughters sleep on this side—the left side of the ghop; her two sons have the men’s side to themselves. Nariyo’s husband died some years ago. She was illiterate at the time, and had not yet heard about Jesus.

Then she found out about literacy classes. Some were saying that if you take the class from the missionaries, they’d give you animals. (Which is not true, by the way.) So she came. She learned how to hold a book and a pencil. And she learned to read and to write.

The first book she owned was the book of Mark from the Bible. “I read and read and read,” she told me (through a translator). “I learned firsthand about Jesus, and what he did for me. I would kiss and kiss the book; I was so thankful.” 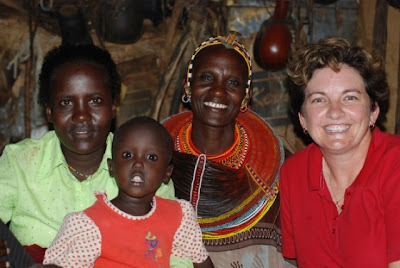 She also started going to church, and learned even more about this God who cared about her. Bit by bit, the Holy Spirit convicted her of changes she had to make in her life.

“I stopped pouring out libations to the gods,” she explained, showing how she’d always pour a bit of camel or goats milk on the floor of her ghop. And I stopped doing the quarterly animal offerings.” (Four times a year, the men in every family has to slaughter an unblemished animal. They’d first wash the nose and tail in milk, then slaughter it. The men would smear blood on their foreheads and chests, and blood would be poured onto the door posts of the ghop. This was a sin offering for the family’s sins and for their protection. Then the women would cook the meat for the family.)

Nick, the missionary translator, explained what a significant change this is. It’s very obvious when you approach a manyatta which families are believers and which aren’t. The non-believers have the branches used in the ceremonial offerings draped over their homes.”
But there were also other changes. Under the conviction of the Holy Spirit, Nariyo now refused her brothers-in-law relations. (In many tribes in Kenya, widows are still inherited by the late husband’s brothers.)

We also talked about some other cultural traditions, like greetings. Nick had explained that I had worked in Taiwan before, and when I told her that the Chinese often greet one another around mealtimes with a “Have you eaten?” she covered her mouth in total shock. The Rendille would never ask someone if they’ve eaten! Since many go without meals, it’s simply too personal a question to ask.

It was not hard to see why Nariyo is so very well respected in the community. She’s on the church’s regional woman’s council (a position usually reserved for educated women) and is one of the local church’s three evangelists. Afraid to share the Gospel, she is not! He brother and his wife used to mock her for her faith, but they have since come to faith in Christ themselves. Now, they are bearing the brunt of their community’s chastisement.

I wished I could sit around and visit longer. I truly felt a heart connection with this widow. (Though she referred to me as a “grown girl” due to the fact that I’m not married!) But our visit was interrupted by impending rains. We closed in prayer, and as we drove off, my new friend waved as eagerly as she did when we arrived. 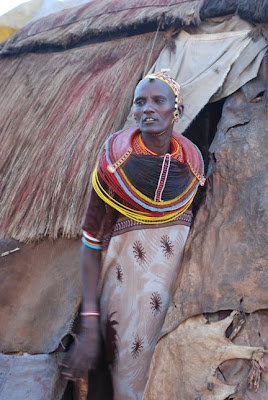 Nariyo, coming out of her ghop (house). The entrance is very narrow both for privacy as well to keep animals out.
In my few days’ visit to the Rendille people, I’ve been encouraged to see what God is doing among these people. I’ve had amazing times of simply reading God’s Word, seeking guidance for the journey forward, of praying, listening, watching what God is doing.

Tomorrow, I’ll be heading back to the city. For me, as for my friend Nariyo, the journey of faith continues. I cannot help but agree wholeheartedly with her that “All we do in faith cannot compare to that which Jesus has done for us.”

Again I am reminded that it’s not about what we do, but about living lives surrendered to Him.

For more news on what is happening in this part of the world, visit the Swanepoels' blog.
Posted by Adele around 5:09 PM