Today through my windshield

After a wonderful visit by my sister, I headed back to Eldoret today. On Thursday, I had driven to Nairobi with a colleague who was meeting a team. That evening, I met up with Liesl and had a wonderful meal and a stay at a nice hotel (thanks to her work--my copayment was the same as if I would've stayed at the missionary guesthouse!) On Friday, I dropped off the car with the mechanics for an oil change and new front shocks, she and I flew to Eldoret after she presented the workshop she was sent to do. She met the kids and my colleauges, experienced a big, Kenyan rain storm, hung out with me on Saturday, and then we had to head back to the city. We picked up my car and on Sunday, I showed her around Nairobi and took her back to the airport so she could return to South Africa.

The plan was for me to head to Eldoret right after breakfast this morning, but after just a short while on the highway, I discovered that everytime I reach about 50mph (80kmph), the steering wheel starting vibrating terribly. I was finally able to turn around and head back to the mechanics, then to a tyre shop. (In case you wonder, in British English, we write tire with a y.) Got the wheels balanced and aligned, and it was 2 pm before I could leave the city. Not good, since the drive home is at least 5-6 hours, and I didn't want to drive at night.

So I drove non-stop, being kept company only by Beth Moore's teaching. Great stuff! It made the stressful ride not stressful at all. I listened to "Believing God" while having to duck sheep crossing the road, a drunk man that almost fell in the road in front of my car, and more... I crossed the equator 3 times--it's a winding road with Nairobi south of the equator and Eldoret 1 degree north of it. 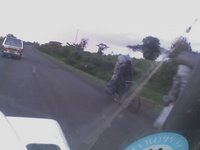 I passed several bicycles loaded high with charcoal and snapped a quick picture. If you look closely at the photo, you'd be amazed what a load these guys carry on their bikes!

By the time it started getting dark and it started raining, I was close to home. The rain caused swarms of flying ants to come out, and I saw a kid eating these as fast as he could catch them!

Didn't see any zebras or baboons on the side of the road today. It's not unusual to see those near Nakuru. The were probably there, but I was paying attention to the road. For about 70km (40miles) before you get to Nakuru, the road is terrible! There is hardly a smooth stretch between all the potholes. In between ducking potholes, you have to keep an eye on the trucks passing both ways and trust none of them kick up stones that will chip your windshield... After Nakuru there's a smooth stretch for about an hour, and then comes a road that doesn't have as many potholes, but deep ruts! This is worse than potholes, I think, because passing a slow-going truck on those roads is tough. The road is once again winding, and imagine going over deep ruts on a winding road!

I was very, very thankful to pull into our compound at 7:30, five and a half hours after leaving Nairobi. Didn't get to see the kids tonight, but I'll go and greet them in the morning. There's a lot I need to get done this week, but I believe it will be a productive one.

But for now, I'm off to Dreamland after this long day...
Posted by Adele around 2:13 AM