Life at the Foot of a Volcanic Mountain

I live on an island, just a hop, skip, and jump from the coast. Not really. You'd need to hop, skip and jump over the mountains first. Between the apartment I call "home" and the ocean lies a mountain. I live at the foot of a gorgeous volcanic mountain. 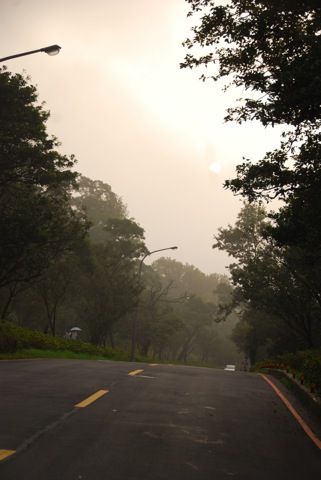 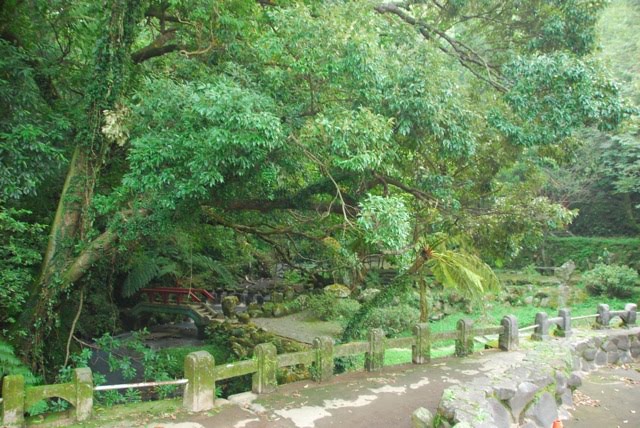 Seeing that it was still early, I could easily pull over and take in gorgeous little waterfalls


The volcano is extinct, though. But it still has sulfur springs. Some are hot enough to boil eggs in. Which people do. Just for the fun, I guess.

You can smell the sulfur as you ride up the mountain. Having lived higher up on the mountain during my previous stay in Taiwan, I've grown to love the smell. I had driven the roads around the northern tip of the island many times, usually in the small car I used to have. I called it the Silver Bullet. It was actually gray. And not too fast. The name was an optimistic take on life.

Today was my first time to drive these roads on my scooter. A friend had left me her 150CC Yamaha scooter, which has been a tremendous blessing. I'm calling the scooter Solomon, since it has three stickers on it with Salomon written on it. I'm guessing it's the snowboard company. I'll call it Solomon instead. For the wise king of Israel. Partly because I'm working on a class on church history right now. But mostly because I seek to be wise. Part of my Chinese name, in fact, is "wisdom," since that is what I seek to have.

But that's another story.

Seeing that I've been waking up at crazy hours, thanks to jet lag, I decided this morning to head up the mountain. Beat the crowds and go early. 'Cause the mountain really gets crowded on Saturdays. As in bumper-to-bumper traffic most of the afternoon. 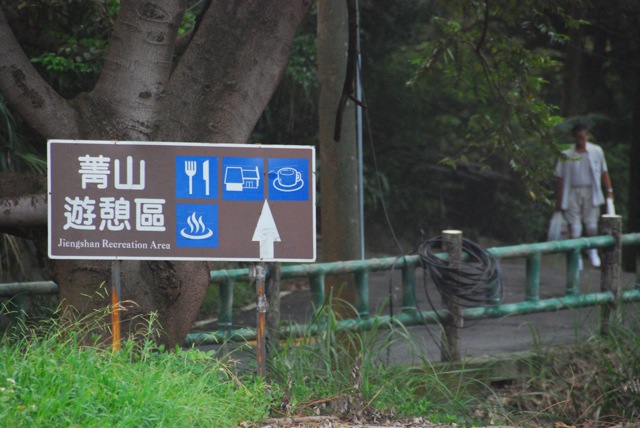 Once you're up on the mountain, you can explore various nearby mountains, all with hot springs

There were hardly any cars on the road. Some bicycles. A few other scooters. The cars started trailing up the side roads only as I made my way down.

It didn't take long before the smell hit me. Sulfur. It made me smile. I passed the turn-off to my former home, passed the alleys leading for former friends' homes who have all since moved. Stopped at the 7-Eleven high up on the mountain to get a cup of latte. The Starbucks next door was still closed, else I may have stopped to study there. 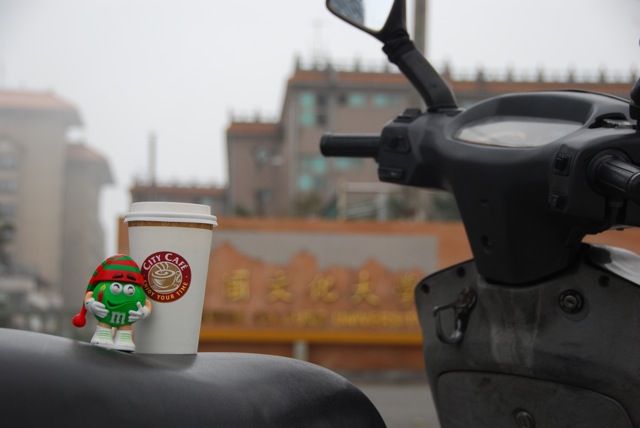 Kiptoo and I, stopping at the top of Yangming Mountain (with the Taiwan Cultural University in the back) to enjoy some hot latte from 7-Eleven

But I kept going higher up the mountain, passing many older people who were heading out for early-morning walks. Many greeted me in Taiwanese as I waved at them. I don't speak Taiwanese, only Mandarin. But a smile and a wave transcends language barriers. 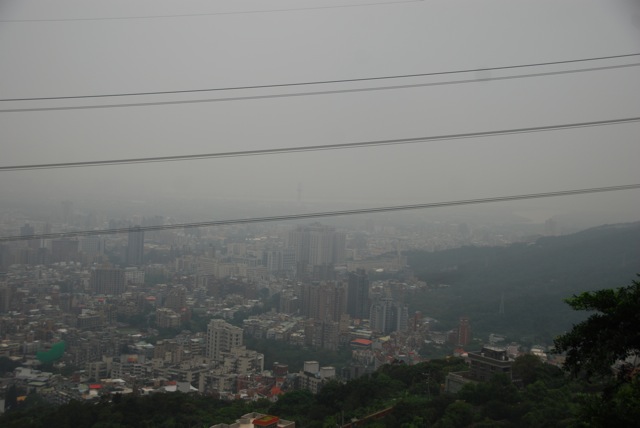 Looking down at my neighborhood... Due to the haze you cannot see it clearly, but the ocean is visible towards the top right corner of the photo


Not wishing to go all the way over the mountains to the coast (not today, I didn't want to be stuck in the traffic later in the day, plus I need to study), I turned around at the entrance to Yangming National Park and took a side road down to my neighborhood. I took a side road down to my neighborhood


The side road is much steeper and way more curvy. You constantly have to make hairpin turns. I was glad there were only a handful of cars winding their way up the side road by that time.

Suddenly, a rock about the size of 3 baseballs landed a meter or so in front of me... I looked up and saw a whole group of macacus monkeys up in the trees right above me. They weren't happy, for whatever reason, so I didn't pause to take a picture... 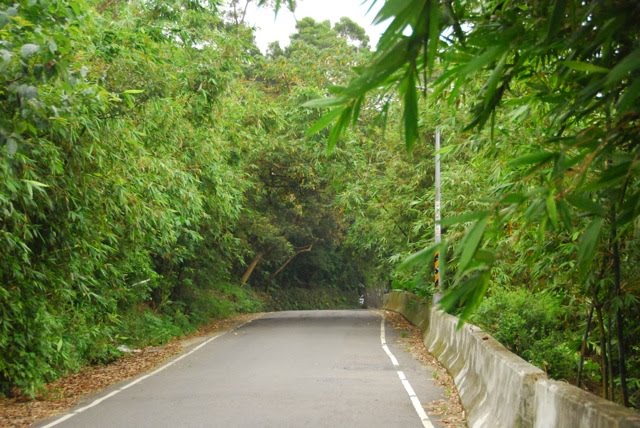 Passing through the bamboo forests


As I kept winding down the mountain, I passed through bamboo forests, then past small-scale farms until the road spit me out in Tienmou, my neighborhood, where I stopped for breakfast and to come and change into something cooler. 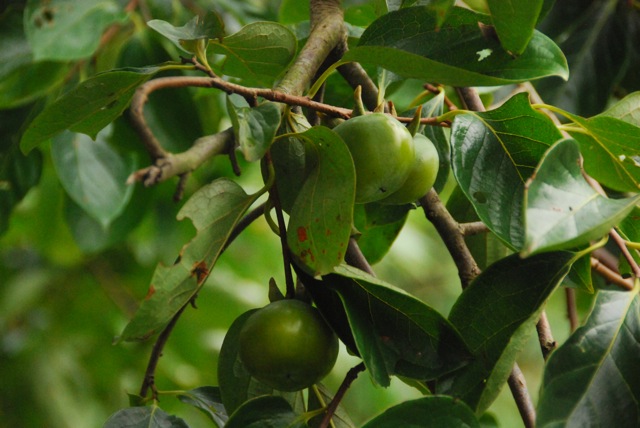 Closer to the foot of the mountain, some small-scale farm with persimmons ripening on the tree 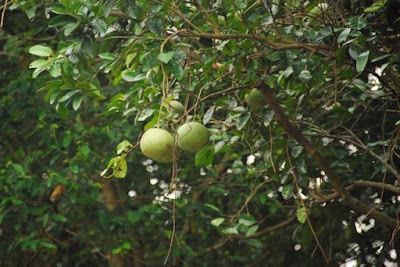 At the same farm, the "moon fruit" aren't ripe yet, either. These are giant grapefruit that are usually ready by Moon Festival, which is coming up next month 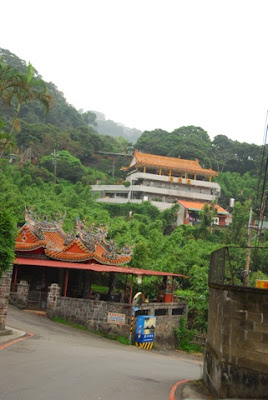 Entering Tienmou, I passed by two local temples. The one at the back is a Buddhist temple (it's more simplistic) while the one in the foreground is a Taoist temple 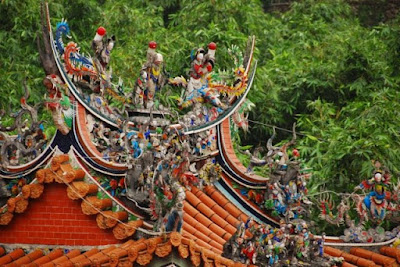 Some detail on the Taoist temple roof


Now, I'm heading out to make myself at home in some little coffee shop someplace and study.

Life at the foot of this volcanic mountain is good.