According to the Lunar calendar, today is the 5th day of the 5th month. And the 5th day of the 5th lunar month is the day when the sun is at its highest and the heat starts to become oppressive. On this day, many people in this part of the world prepare sacrifices to protect themselves against the spirits that allegedly thrive at this time of year.* And on this day, there are lively races in many places around the world where you find Chinese people.

The festival officially started about two weeks ago, when the dragons where "woken up" by having their eyes dotted. And teams (most local teams, but some are international) will have been practicing for a while now. Especially the ones who are serious about winning, not only for the money, but also for the bragging rights. 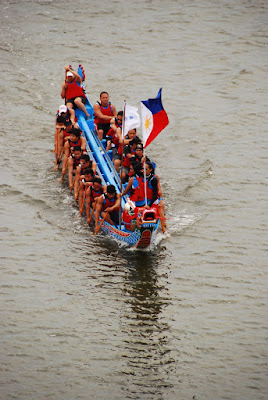 The team from the Philippines have been competing since 1995 and are one of the favorites. You can see a marked difference between the teams that are serious about winning and those who compete for the fun of it. Look at that teamwork!
I headed down to my old neighborhood (Dazhi, where I lived & worked for almost eight years) and joined a small army of photographers on the bridge, from where we had a bird's eye view of the races. (I'd've loved to get close to the boats to take more photos, but by the time I got to the races, that area was off limits to the public.)

From the bridge, I could see most of the 500-meter stretch of the race. I have no idea how many times each team had to race, but it looked insane! They'd race, then paddle back to the starting line and race again without resting. I'm sure there are many aching bodies tonight... And the races continue this weekend! 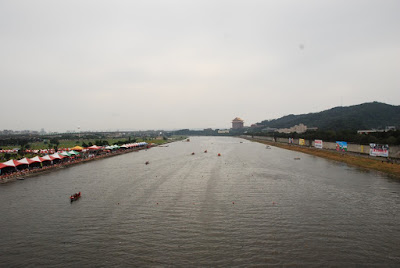 The three boats in the center are racing. The two on the left are returning to the starting line. In the background, you can see one of Taipei's landmarks, the Grand Hotel. I'll never forget: The very first day I worked in this area, the top floor of the Grand Hotel burned down! 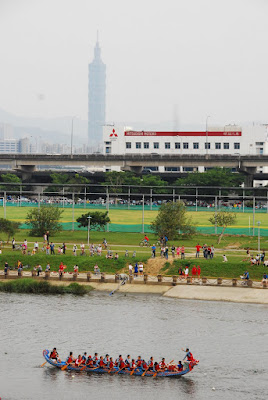 Backing up into the starting spot. In the background, you can see another one of the city's landmarks: Taipei 101. At 509.2 meters (1,670.2 feet) tall, this is currently still the tallest occupied building in the world. A building in Dubai has surpassed it in height, but it's not yet occupied... The 101 also has the world's fastest elevator. It ascends at almost 17 meters per second, or more than 55 feet per second!
So what do boat races have to do with the start of the hottest time of the year?

The best-known legend concerning this day revolves around a poet named Qu Yuan who lived in China in 340-278 BC. When Qu's talents became the target of slander. So he committed suicide on the 5th day of the 5th lunar month by weighing down his clothes with stones and jumping into a river.

Legend has it that local fishermen raced to help him (hence the boat races today) and threw rice in the river to prevent fish from eating him... Hence, another tradition for this day is to eat zong-zi, sort-of like rice tamales. 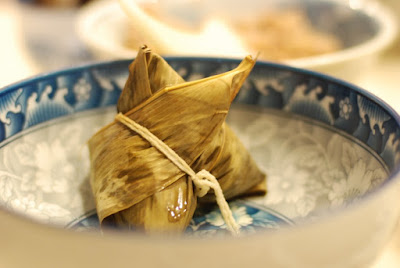 We had zong-zi as part of our dinner tonight. Vivian and Keith (whom I live with) had spent the afternoon at Keith's mom's place. Chen mama cooked the rice filling, and Vivian (who is Filipino Chinese) learned from her mother-in-law how to fold, fill and tie the zong-zi. 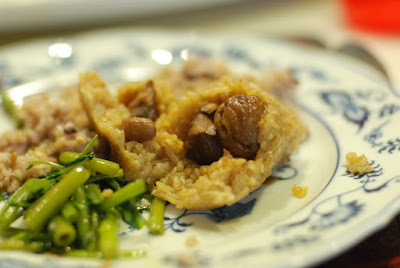 Inside the glutinous rice stuffing, Chen mama had put chestnuts, mushrooms and pork. You can get all kinds of different zong-zi stuffing. Some are just glutinous rice.
Though the actual races focus on teamwork and competition, there still is a strong spiritual connection with the races, from the dotting of the eyes to teams offering ghost money to the spirits. In fact, some of today's boats had wads of ghost money stuffed in the dragons' mouths. One tradition is for competitors to toss the money into the water before a race, feeding the money to the dragon (and probably burning it after the races for the spirits) would be a different option. There are also specific ceremonies along the shore facilitated by Buddhist and Taoist monks to invoke blessings on the events. 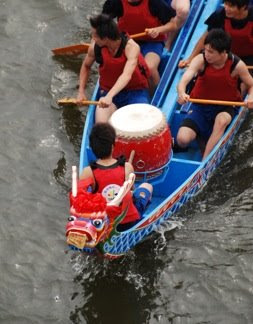 Notice the ghost money hanging out from the dragon's mouth
I continue to be amazed at the intricacies of the Chinese culture. So many of the day-to-day cultural activities go back centuries, and hence helping someone understand the dark side of many of these practices is very difficult.

I wonder how many of our Western cultural practices have very dark roots...


*According to my book, the "five noxious creatures," (the scorpion, centipede, snake, lizard and toad) arrives during the summer and bring with them unseen evil spirits. At this time of year, many people will hand sprigs of calamus and mugwort on their door to protect them against these spirits. I've seen many children specifically wearing protective talismans during this time.
Posted by Adele around 9:11 PM