"In God's eyes, we're all winners"

Without hesitation, Gabe stepped up, thanking the kids in Kipkaren for the warm welcome and for making the day so memorable. He thanked the parents for the work they did to make the day a success. And then he told the Kipkaren kids, "Don't worry that you didn't win the games today. Just remember: In God's eyes, we're all winners." (Read more about the day's events here.)

I couldn't have been prouder of my Ilula kids! Nor of the Kipkaren kids for being such gracious hosts and trying so hard to beat the Ilula guys at football! (They really made them work for the trophy!)

It was an amazing day! I took lots of photos and will post the ones that best depict the day on Flickr this weekend, in between events. Right now, I simply want to take a shower and sleep! I was visiting with the kids the entire day, and even in between, when I was running to my house to cut up oranges for the teams, I had a little shadow, Dennis. 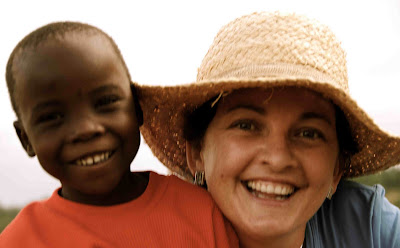 Since he came to visit me with Solomon the other day, Dennis must've decided that I'm a fun buddy to hang around with. He was at my side for at least half the day! He doesn't say much. He smiles a lot. And he has a raspy chuckle. When I was visiting with Ilula kids, he'd quietly play somewhere nearby. Didn't have any demands. Simply wanted to be my friend for the day. He was thrilled, though, when I introduced him to Dennis from Ilula who's just as little as he is. They played for a while while I went to check on some of the other kids.

Tonight, I have no doubt the kids are very, very tired, but equally happy. I think many will be falling asleep with a smile on their face.