If you're in the area, feel free to stop into Higher Grounds. They're open on Sundays during church hours (8:30 to noon) and on Wednesday evenings from 5:30-9.

The photos on exhibit are for sale. Please contact me directly if you're interested. If you live outside of the Cedar Rapids area, you can order unframed prints which can easily be mailed to you. 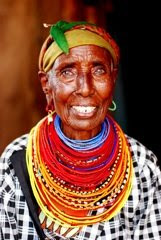 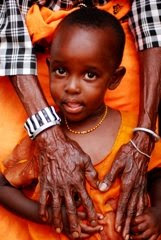 Nabiro and Khoboso are Rendille, a nomadic tribe that lives in the desert in northern Kenya. Though old enough to be a grandmother (gogo), Nabiro adopted Khoboso a few years ago.

I love the contrasts in their photos—Nabiro’s weathered skin compared to her daughter’s smooth, young complexion, as well as the vivid colors. Friends of mine work among the Rendille, doing Bible translation, teaching literacy classes (their most effective evangelistic tool) and building schools. Nabiro has been working with them for more than 30 years.

Many Rendille children cannot attend school due to the danger of hiking many miles through areas where hyenas and lions still run wild. 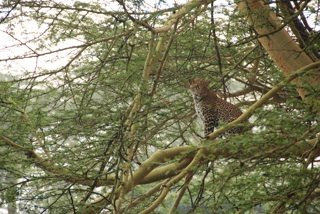 Africa’s big cats are amazing! It’s hard to spot leopards, the strongest of the three big cats. They can drag more than their own body weight up a tree, where they feast on their catch for days, blending well with their environment.

I had spent the day in Nakuru National Park with a couple of visitors, taking time to debrief them after their 2-week service at our clinic. We were heading out of the park when we saw some vehicles parked under the fever trees, with people looking up into the tree.

I could sit for hours and watch this leopard watching our every move. 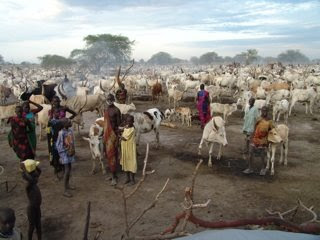 Empowering Lives (whom I worked with) also does work among the Dinka in Southern Sudan, an area that has been ravaged by decades of war.

The Dinka, one of several tribes that call Southern Sudan home, place immense value on their cows. I had the honor of visiting a Dinka cattle camp, where more than 700 people lived in the open with 10,000 cows. We invited the community to a health clinic we were offering at our center.

There is no town anywhere near this village. The Dinka live off the land and off occasional grain handouts by the UN World Food Program. 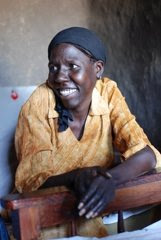 Along with poverty, HIV/AIDS is one of the biggest problems Africans face. Betty was on the verge of dying when she cried out to God, saying, “If you exist and have something left for me to do, let me live. But if there’s nothing left for me to do, please let me die!” The next day, Betty met someone from ELI’s home-based care ministry, and was taken to start anti-retroviral treatment.

Not having much more than faith and a wonderful personality, Betty sees AIDS as the only gift that she can use to serve God. She tells others about the importance of knowing your HIV status.

She speaks boldly about HIV/AIDS—and about God’s grace—at open-air campaigns.

I took this photo while visiting Betty in her two-room mud house. 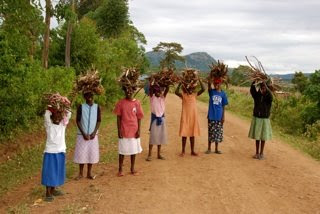 More than 80 percent of the orphans at ELI’s children’s homes lost their parents to AIDS. These are just seven of our almost 100 orphan girls. Here, the girls had spontaneously gathered firewood to take to Betty’s house when they heard that she wasn’t doing well. (For Betty’s story, see photo 5.)

ELI follows a family-centered approach to orphan care. We employ devout Christian couples to serve as parents to 12 boys and 12 girls. The parents teach the children Christian values as well as life skills so that the children can return to their villages someday and still know, for example, how to cook over an open fire, or build a mud hut. 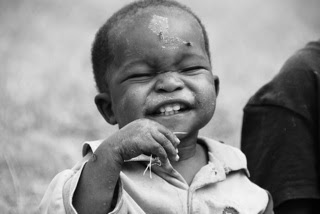 Victor’s smile fails to reflect the challenging circumstances he was born into. The youngest of six children, his mom has AIDS, is an alcoholic, and his father (a drug addict) was in prison at the time of my visit.

Our home-based care team visited them weekly, taking Tekla (his mom) to the clinic for her anti-retroviral medications. Our AA-team was never able to convince the parents to come for rehab. 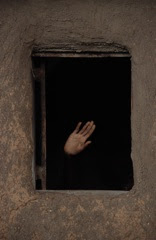 I had the privilege of worshiping Jesus at Hannah’s house many days. Hannah had a large tumor that deformed her face and left her strong body weak, but was never able to rob her of her deep joy and her faith in Christ. A colleague and I went to her house every week to spend time visiting with her and her family, worshiping, and simply praying.

I took this photo as my colleague and I left Hannah’s house one afternoon. You can see Hannah’s face in the corner of the window.

Hannah passed away last Christmas, a day before the post-elections violence broke out in our community. 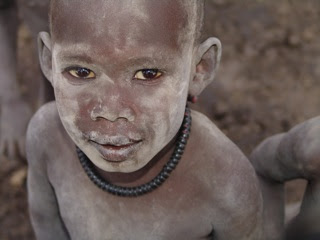 In the Dinka cattle camp (see photo 4), every person has a role to play. The three- to seven-year-olds take care of the calves. They collect all the fresh dung, dry it in the sun, and then burn it.

At night, the littlest ones sleep in the cow ash, hence this little one’s dusty face. The cow ash keeps bugs away. They also use the cow ash to brush their teeth as well as decorate their bodies.

This is the only time in my life to have seen cheetah cubs in the wild. If you look closely, there are six cubs playing in the grass. They’re well camouflaged, though, since the cubs are very vulnerable to being hunted by hyenas and other predators.

Cheetahs are the world’s fastest land animal, able to go 0-68mph in a mere three seconds. Hot air balloons don’t move fast at all! Doing hot air balloon safaris over the Maasai Mara and Serengeti plains is a very popular adventure for tourists. 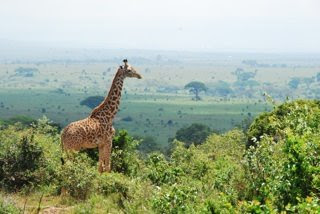 I was fortunate to grow up in Africa, and to have seen wildlife in their natural habitat from a very young age. God’s creation never ceases to amaze me, though. 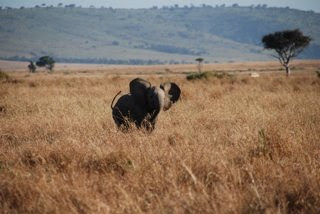 This baby elephant charged at my car, wanting to show me who’s the boss. When I didn’t move, he stopped dead in his tracks and ran back to his mother.

When elephants are this small, they discover their trunks. When they utter their very first little trumpet, it actually scares them! 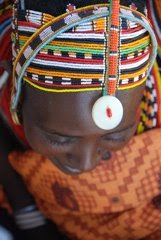 Before leaving Kenya last November, I was able to visit missionaries in northern Kenya. I thought I lived in a fairly rural and remote part of the country, but it’s urban compared to where they live!

My friends took me along to one of the local manyattas to drop off medicine for a teacher, and sent word out that they’ll be driving north. When we got to their pick-up, there were already 14 ladies crammed in the back, thankful that they did not have to walk the 10 miles home that day after coming to town.

I stood in the front corner, holding on for dear life while having only enough space to stand on one foot, with this lady sitting on that foot of mine. The ladies sang the entire way and loved that I tried to join them in singing. 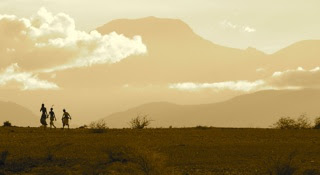 The Rendille people only have a circumcision ceremony every 13 years, and for the next 13 years, these young men’s sole purpose is to protect their community—a role they take very seriously.

The warriors have recently returned to their community after spending a couple of months traveling to far-off areas where they could graze their goats and camels. They usually have rain one or two days a year. Last year, they had rains for a week!

The warriors in this picture were based closer to home, protecting their villages from hyenas, lions and camel raids from neighboring tribes. 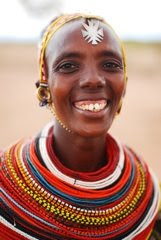 Indubaayo joined my friends’ literacy classes, where she received the book of Mark, their first translated and printed Gospel. She wanted nothing to do with the Jesus of their book, though.

Once able to read, she got terribly sick and had to stay in her hut for a week. During that time, she read the entire book, and surrendered her life to Christ.

When she came out from her hut, she was not only healed, but was on fire for God. She is a passionate evangelists, and often spends weeks in the desert ministering to the warriors as they take care of the goats and camels. One of my favorite places in Kenya is the Kakamega Rainforest. Before leaving Kenya at the end of last year, I spent a weekend in the forest, seeking God’s direction regarding the way forward. I had my camera by my side since Colobus monkeys often play in the trees surrounding the retreat center. After taking photo of the black and white monkeys and a shot of my Bible, I returned to reading and journaling.

God gave me peace that weekend that it was time to move on, and that I could trust him to guide me on my way forward. It’s been a journey of faith and of trusting God.

I look forward to seeing what the road ahead holds. 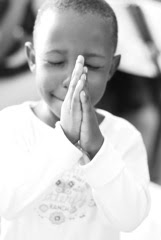 Mercy is one of our orphans. Even the littlest ones love praying! Before I left, they gathered around me and prayed passionate, faith-filled prayers for God’s guidance.

I miss the kids in Kenya immensely. They’ll always hold a very special place in my heart. 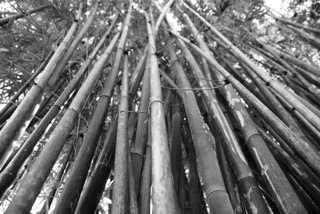 This photo of bamboo stalks reminds me that things that seem overwhelming down here can become small when we turn our eyes to Heaven. 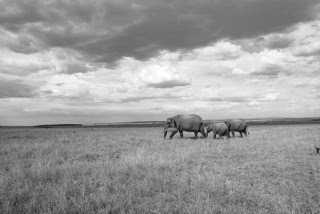 Though the largest land mammal, you hardly hear elephants when they walk. Their large feet muffle the sound of breaking branches. You’re more likely to hear their stomachs rumble! They eat 500 lbs of vegetation a day, and stand up while taking short naps before continuing walking and eating.

A herd of elephants can wipe out a farmer’s crops in an evening. Human/elephant clashes are not uncommon in northern Kenya. In the south, where this photo was taken, the Maasai are cattle farmers, and live at peace with their elephant neighbors. 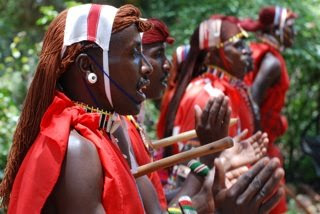 The Maasai wear predominantly red, believing that it scares off lions. It is not uncommon to see Maasai herdsmen in their red robes, even in the cities. 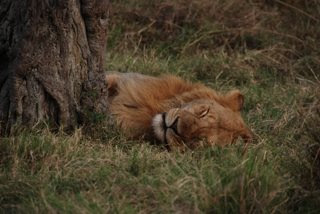 Male lions sleep about 17 hours a day. The females hunt, while the male get to eat what the females caught. Mankind is their only enemy. 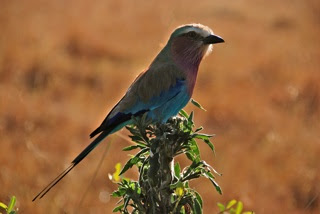 The lilac-breasted roller is one of my favorite African birds. It has seven distinct colors: navy, turquoise, tan, lilac, black, white and teal.

Though only about 14 inches tall, the roller will go after any predator that dares to come close to its nest. During breeding season, the male tumbles through the air to draw the female’s attention. Males and females look alike.
Posted by Adele around 10:55 AM