The Corpse in my Car

Today, I had a dead body in my car. Her name was Caroline, and she was 16. She drowned on Tuesday. Her body was found today.

Caroline wasn't originally from this area. She was living with family in our neighborhood in Kipkaren. So her body had to be transported up into the Nandi hills, 40 kilometers (25 miles) from here. When I was asked if it would be possible for me to help by driving the body home, I didn't think twice. My car is big. The back seat can fold down. I'll go.

It's only after I had said "Yes" that reality set in. I'm not afraid of a corpse. It's just a shell, after all. But she's been dead for three days, and her body had been in the river all this time. So I grabbed some Tiger Balm to put under my nose and left for the family's house nearby, where I was to pick up the body.

My upper lip was still burning from the Tiger Balm when I rounded the corner to the hut. I greeted the solemn crowd, not sure who to convey my condolences to. One man stepped up. "Thank you for coming. Now, are you brave?"

"Why do you ask?" I responded politely, not sure what to expect.

"Do you want to see the body?"

Quite frankly, I didn't. I've seen very few dead bodies in my life. In my culture, we don't have viewings, and we rarely have open caskets. I can count on one hand the number of dead bodies I've seen. "Can you help me?" I asked, still not sure who the gentleman is who I was talking to. A family member? A pastor? Neighbor? "What is the best thing in this culture? Should I go to see it, or not?"

"You come," he said, and promptly led me through the crowd. I stepped into the mud hut. There was nothing in the living room, except the body. "This is it," the man said somewhat nonchalantly. She died on Tuesday. She fell in the river. She was found today. Now, let's see who will drive with you."

Before my eyes had adjusted properly to the darkness in the hut, we were out of there.

I put the back seat down and lay the tarp on the floor of my vehicle. As they carried the body - simply resting on some sacks and a sheet - through the crowd, no one cried. Some children simply stared. I wished I could speak Nandi so I could understand what was happening around me.

After we prayed, people started filing into the car. Grandpa in the front seat. The girl's dad in the seat behind him. I had thought only two people would fit in the back on one fold-down seat, but they said more can get in. I put down the second fold-down seat, and now the body was surrounded on all sides. An uncle. Two gogos from the community. And John, the neighbor who was with the girl when she fell in the river and drowned. Her head was right behind my seat, and everyone in the back was trying not to step on the body. (!) Someone covered her face with a veil. And off we went.

As we passed through the market, the neighbor asked me to stop. He needed to buy Doom. It started raining as we were waiting. The roads were already drenched and streams were flowing on both sides of the road. John came back with the can of insect repellent. They were spraying the body as well as their feet as I continued driving, not sure if the smell of the poison was stronger, or that of the body. What made it worse was that I couldn't open my window because of the rain.

David (my director at Kipkaren) called soon afterwards. "Adele, are you scared?"

The answer came to me hardly two minutes later, as we started fishtailing on the muddy road. To add to it all, the road we were on was incredibly bumpy. All of us were bouncing in our seats while I tried my best to keep the car on the road. I felt badly that Caroline was having such a bumpy last ride, but what can you do?

I passed two small cars that had ended up in the ditches on the side of the road and prayed that God would protect us from sliding into a ditch, too. Not much later, as I was coming round a bend in the road, going at no more than 10 kmh (5mph), there were two trucks that had gone off the road... It was clear that we wouldn't be able to pass. "No worries," the grandpas explained. "There's another road. Go back." 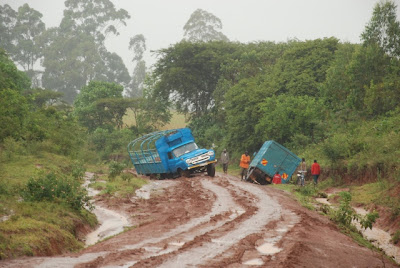 After finding a safe spot to make a U-turn, we headed back to where the road had forked, and took an even worse road, one that would take me through two rivers. Through, yes. They had thoroughly flooded the road. One was so strong, I had to cross toward the opposite direction where I wanted to go and make another U-turn up the road.

And so the journey continued, all the way back to the Nandi Hills where I had picked up orphans a year ago. In fact, I recognized many a beacon on the road, and literally passed three of the homes along the way where I had picked up children. How ironic, I thought, last time I was here, I brought good news for the children and their guardians. Today, I'm the bearer of sadness.

The last stretch of the journey took me down a road that has likely not seen a car in ages. And then we were there. Two hours for forty kilometers.

I got out to meet the family while the men were carrying the body on the tarp from the car. One lady greeted me with an enthusiastic smile, and seconds later, started wailing. It was surreal. And it was strange being in a place where I didn't think I should be. Caroline is being brought home. This is family time. But even as I got ready to start the return journey, neighbors started coming. Some by foot. Later, I passed a truckload full of people from Kipkaren who were coming to mourn with the family.

The road back seemed a bit easier. The rain had let up, and one of the three gogos who were going home with me ended up navigating a bit shorter way home, one that didn't take me through the rivers again. But on the worst stretch, there was once again vehicles stuck in the most awkward spots.

I was relieved to pull into our compound ninety minutes later, just as the sun started setting.

"Two more children fell in the river at Turbo today," Sammy told me. "Their parents are now around here looking for them." That would bring the total to four people drowning in this river in five days. (A nephew to one of our staff members drowned on Monday. His grandma had given him a cookie, and he was washing his hands in the river before eating his cookie. But the cookie fell into the water, as did he when he reached for it...)

As the rains continue and the river keeps swelling, please pray for safety for people who, like Caroline, have to cross the river every day. (There are few bridges in this area, and the logs where Caroline crossed were submerged in the swollen water.) Or for young and old who depend on the river to bathe and to feed their cattle.

This is Africa. And life in this part of Africa can sometimes be tough. Yet we have hope. Can't imagine life without it.

Posted by Adele around 1:04 AM