Last weekend, I hopped on the high-speed train and headed down to Kaohsiung for the weekend. Due to work, I wasn't able to go with the church group I first thought I'd join, so I connected with my friend Marion instead.

I had met Marion about 10 years ago when she was an intern at ORTV, and though I hadn't seen her, we've kept in touch over the years. And so, Friday after work, I hopped on the train and headed down to the very last stop on the line, where Marion, her husband Kris, and their 3-month-old son Kaeden met me.

I think I fell in love right away with Kaeden.

Look at this. How can one not fall in love with this kid? He wakes up with a smile. For real. And at times, when he's not so happy, his dad takes him flying around the house. He hums the Superman tune to him, which always makes Kaeden smile. 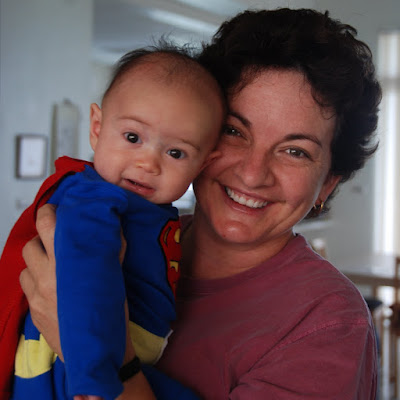 I think Kaeden might truly believe someday that he can fly...

Kris and Marion put Kaeden in a little Superman outfit for church on Sunday.

Just for fun, they put on Superman T-shirts to church, too. As you can tell, they're a great family, and I had an awesome time visiting! 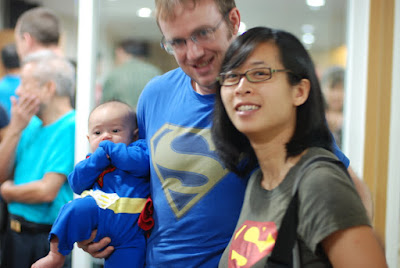 On Saturday, we left Kaeden with a sitter and joined a local church to do some cleanup in a nearby town. Typhoon Marokot, which hit the island on August 8-9 and dumped close to 10 feet of rain on parts of the island, causing landslides and burying some villages in the mountainous areas. At this stage, the official death toll is 376, with another 254 people still missing.

Obviously, the storm has wreaked havoc on the island's economy. Here's an excellent set up pictures from The Boston Globe about the extent of the storm, including damage in the Philippines and China. But the worst damage was in Taiwan.

As you can imagine, the villages that had been affected the worst have been getting the most help so far. In areas, relief crews are still digging for bodies...

So our crew went to Kaoshu (meaning Tall Tree), a village in Pintung County where things weren't necessarily as bad as in other places, but people still needed help!

Kris, Marion, and I joined three other people and helped a coconut farmer clean out his house.

The farmer and his family had about three feet of muddy water wash through their house. We helped to sweep out some more mud. And wash off mud from walls, and from furniture, and dig out mud from behind pipes... It was unbearably hot, but working as a team, I know we were able to bless this farmer and his family!

Here I am trying to get the pressure washer to work so I could spray off some mud from the walls. You can see the mud line on the walls above my knees... 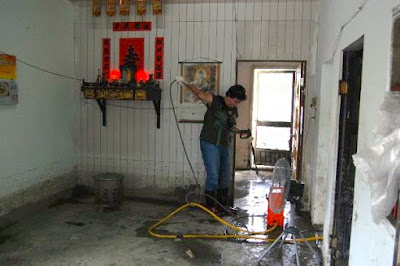 The shelf against the wall is a family altar where this family would be bringing offerings to their ancestors. The urn on the floor below the altar is what people use to burn ghost money in.

After a long time of digging out mud and carefully carrying it outside, we took a break to drink some water. The farmer brought us some fresh coconut water earlier, too, which was a bit hard for me to get down since we simply weren't too sure about the cleanliness of the tools with which he would've split the coconuts. But what can you do when the guy hands you a cup of coconut water and waits for you do drink it? 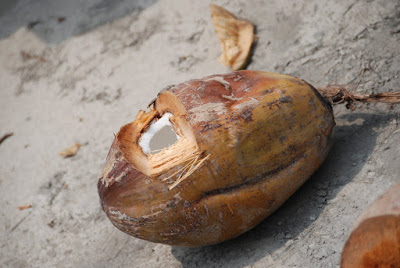 Here I am outside the house. (My face is beet red from working in the hot house.) The water next to the house is mixed with sewage, so we were very careful about not splashing any of the mud we carried outside. The farmer, on the other hand, was walking through this water barefoot! 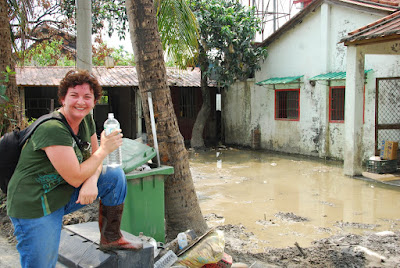 The neighbors' house. Though the damage outside doesn't look so extensive, it's really bad when you step inside the house and there's mud in everything! 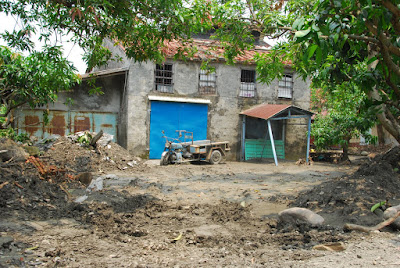 After a long day of working, Kris, Marion and I were thankful to head home and clean up!

Throughout the day, I was reminded a lot of last year's flood in Cedar Rapids as well as of the earthquake in Taiwan on September 21, 1999. I was living on the island then, too, and went down to central Taiwan to help with earthquake relief work.

No wonder my niece Clara thinks everywhere I go, disasters follow! I've lived through a major earthquake, several major typhoons or floods; I survived a tough season of living in the boonies, a civil war; I even held a ticket for a flight on an airplane that crashed (I had changed my travel plans just days before to leave one day earlier)!

But I've survived. No, I think I've more-than-survived all these crazy events in life. I've been able to enjoy life.

Which reminds me. A mom cornered me at school the other day. Her daughters used to be in my youth group years ago, and she asked me why I'm not married. (In this culture, as in Kenya, it's very unusual for people to choose to be single.) Though I was taken aback my her frankness, my answer to her was what I always tell those who ask: that I've had offers, but have not yet met a man whom I've wanted to spend the rest of my life with, and that there are worse things than being single...

"But Adele," she objected, "what if you cannot have a baby?!"

I wonder if that is supposed to be the ultimate goal in life: to procreate.

Maybe I'll think differently about these things if ever I have the blessing of marrying an amazing man and having a child, but for now, I find immense blessing in simply living life to the fullest, in making the most of the freedom afforded by being single and grasping opportunities to live abroad, get a doctorate, and simply enjoying life. Some people might think that's selfish. I think I'm being optimistic.

And so, when I cross paths with friends like Kris and Marion and get to fall in love with their little one, it's not because I desperately "want one of those" for myself, but simply because I find immense joy in seeing friends (and family) grow into a family of their own. I love seeing the promise that a little life holds.

And when that little one has a dirty diaper . . .