Random photos from the past 2 weeks

It's way late. And I'm wiped. But I want to get some photos up so you can see more about the fascinating world I visited the past 2 weeks to learn more about the culture of China.

A relatively new phenomenon in China is local tourism. Wherever we went, no matter what day of the week or what time, there were tour groups. And many of them! The vast majority were from other parts of China. This particular group, if I remember correctly, was from Anhui. Notice their different style of dress! 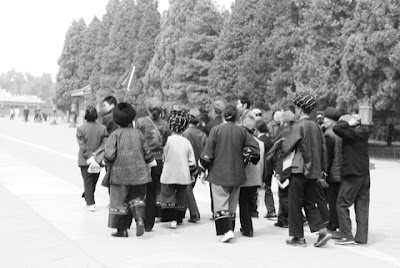 At the Temple of Heaven. This is where the Emperor would come every year to worship the God of whom you could make no idols. The rituals for worship are VERY similar to Old Testament practices, another reason to believe that the Chinese had known about God for thousands of years. 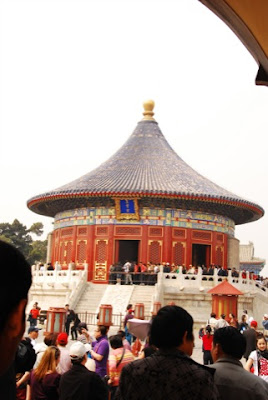 I had a blast hanging out mostly with these couples (from San Diego and Vancouver). Also had fun getting to know the rest of our group of 27! 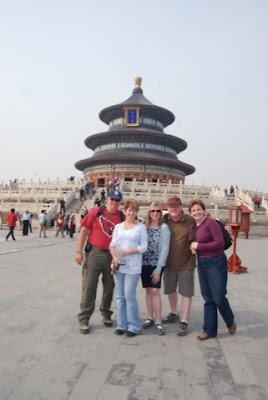 The ornate decorations at the temples amaze me. The primary colors at the Temple of Heaven was blue and green (representing heaven and earth) rather than the red and yellow at the Forbidden City (representing the Emperor). 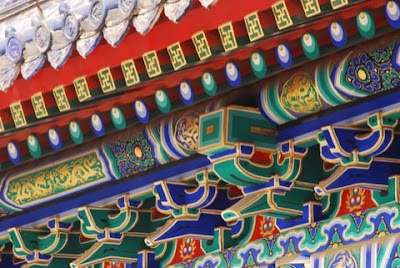 It was amazing watching how people would come and meditate at this one spot in order to get "good chi" (or energy). This is a very Taoist practice ... 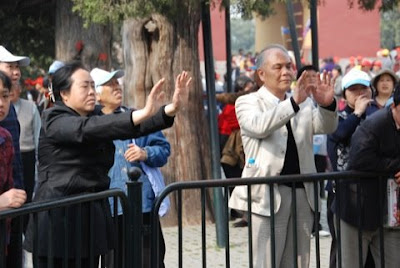 ... and this is where they were trying to get their energy from - a tree! 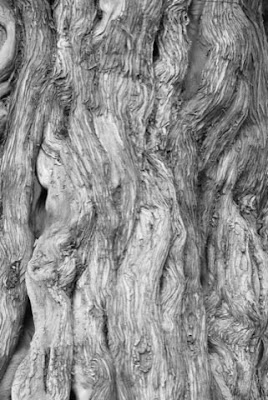 These were twins we saw on the grounds. In a country with a 1-child policy, twins are considered an amazing blessing (and you can keep both without paying the US$18,000 fine for a second child). 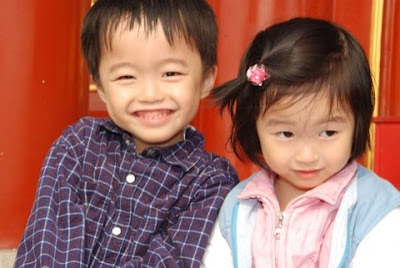 There were many groups of people gathered all around the Temple of Heaven grounds, playing cards, dancing, making music. This old man simply sat and watched his friends play. I wonder what stories he has to tell... 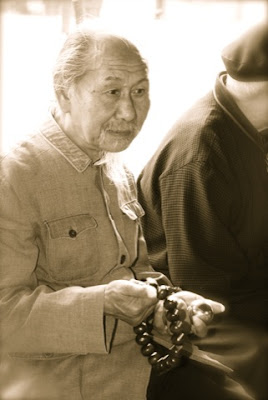 On our last afternoon in Beijing, we were taken downtown, where 3 of the guys from class (Darrell, Mark and John) decided to go for it and be shot up in the air in a giant slingshot! 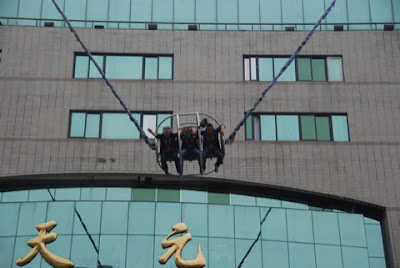 On the train to Xi'an. It was an overnight train. I hung out with my buddies (Rob, Terri, Laura and Scott) for a while. We had good wine and a wonderful time visiting! 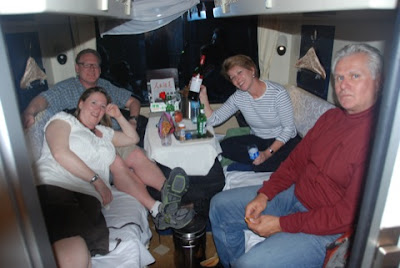 This is a classic shot of a kid wearing kai dang kudze, Chinese-style baby pants which make it easy to train the kid to go... 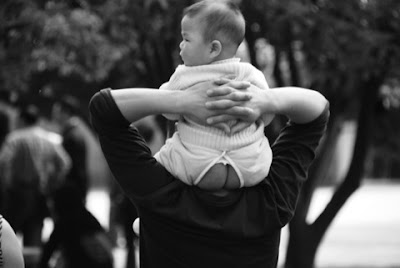 In the suburbs of Xi'an, I saw this kid in a traditional stroller. Since I am now entering the world of baby strollers and such (with my new PR job), it's fun to notice old strollers! 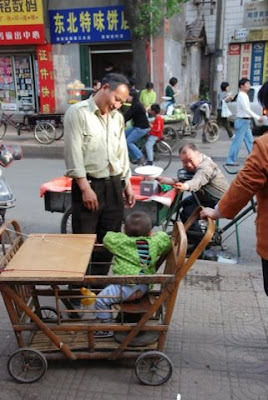 A handful of the Terra Cotta Soldiers. I don't have the energy right now to explain the story behind them. Read it here. 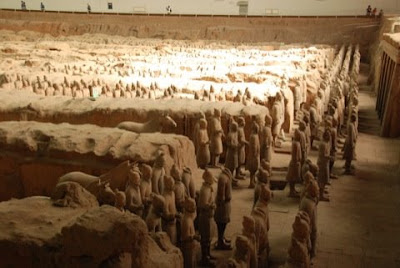 Each one looks different since they were modeled after real soldiers! 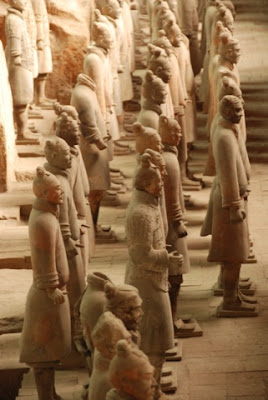 There are thousands more to be excavated, but they've stopped the process for now. 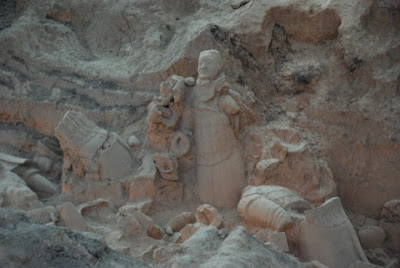 Kiptoo decided to practice his leadership skills and order a few of my miniature soldiers around. 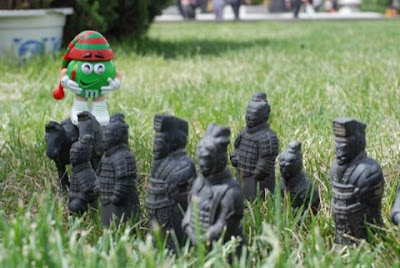 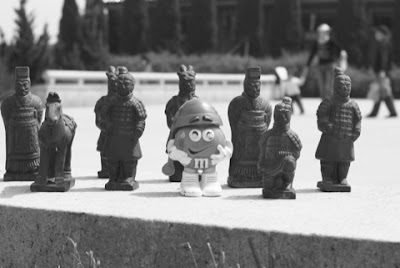 There were many amusing road signs, like this one: "Do not drive online." OK. I'll only chat online. Or post photos online. Or search for information online. (We know it's good not to drive on the line, yes.) 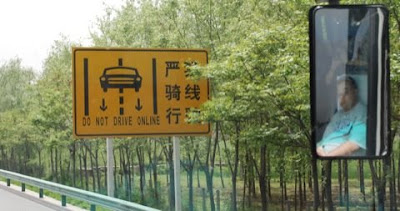 We visited the Nestorian Pagoda, which is a pagoda built in 600-some A.D. when the Nestorians came to bring the Gospel to China! It's now used as a Buddhist pagoda. 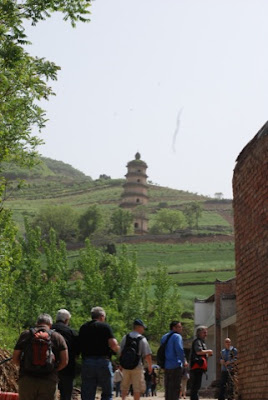 No, I wasn't "squatting" in the winter wheat field. Just having fun taking photos! 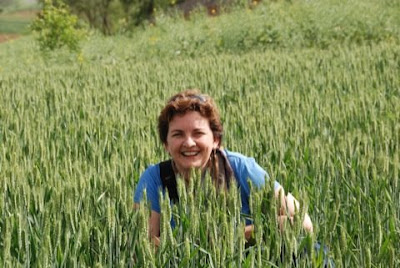 At the market in the Muslim Quarters of Xi'an. Lamb feet, anyone? 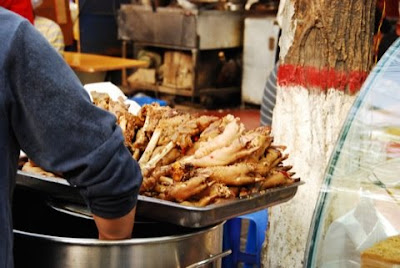 We hiked on the 600-some-year-old Xi'an city wall! 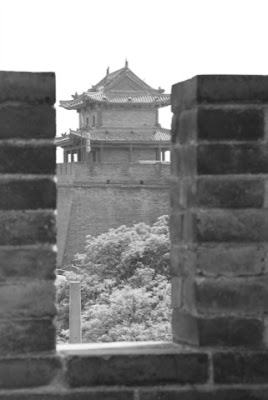 While some classmates chose to bike the wall. (Here's Mark, Rick, Paco and Darrell.) 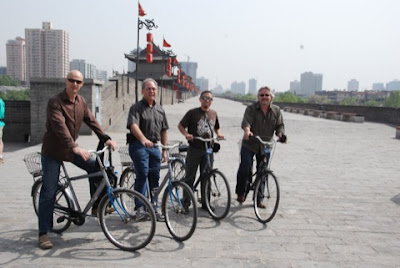 On our last day in Shanghai, we visited a migrant school. Walking to the school, I saw these kids. Then, afterwards, I noticed the 5th kid in the back... 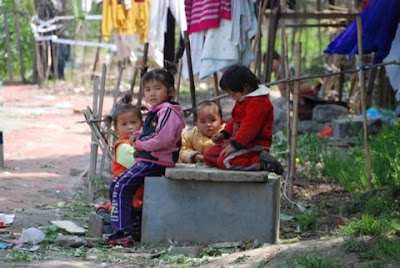 At the migrant school, a little one is practicing calligraphy. 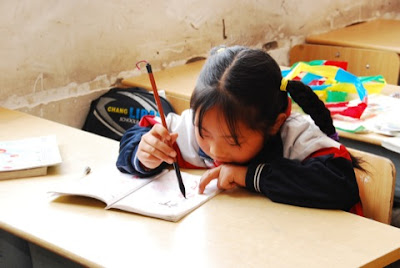 At the school. It was one of the most fun places to visit! 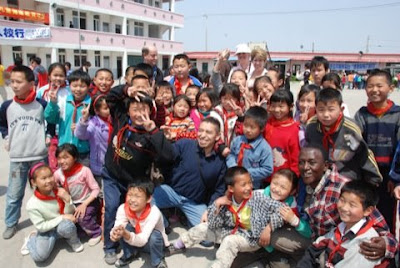