Back from the Boonies

I was in Kipkaren for the past day and a half. Left yesterday morning to help them sort through their storage room. David (Kipkaren director) said, "We don't know what's in there. Can you help us?" And they asked me to paint more logos at Kipkaren. I said I'd help with both tasks if I can wear pants. (Seriously! I've done sorting/cleaning in a skirt, and it's no good. Painting can be done in a skirt, but not if I were to climb on scaffolding!) He said, "You can wear whatever you want when you help us!" 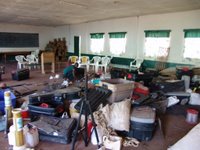 Fred (the training center manager) gave me three guys to help, and the four of us worked together SO WELL. They're the best. William, Moi and Kenei had everything unpacked by the time I got there yesterday, and they had killed 3 rats.. (What I didn't know is that they put the rats in a little bag that ended up between the stuff I was cleaning, so the next moment, I picked up the little bag and said, "What's this?" just as I lifted the bottom of the bag w/ my left hand and felt something soft... They all said, "Don't! It's the rats!" and I threw the bag! 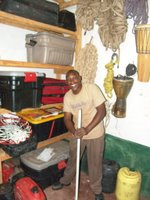 Anyway, after a solid 12 hours of cleaning, sorting, hanging, sweeping and throwing out, the storage area looks great! (William is in the picture.) By the end of it all, my back hurt and I was dirty, having cleaned out so many action packers full of rat poop. (OK, that's exaggerating. There was rat poop in a lot of the packers which I had to sort through.) I was desperate for a hot shower, but I was in Kipkaren, so dream on! There was a big event in the evening, so none of the fires were available to boil water. So I took a cold shower. Even washed my hair. Brrrr!

First thing this morning, I asked Fred to have the scaffolding put up so I could paint the big logo outside the training center. Putting up scaffolding here is no small task. They have to dig holes for the poles, then literally build scaffolding from logs and planks. By 11:00, the scaffolding was ready. But the sun was shining directly onto the wall on which I was to paint, so I proceeded with painting to logo in the children's home office. I finished at the children's home by 3, then went to set up everything at the training center. 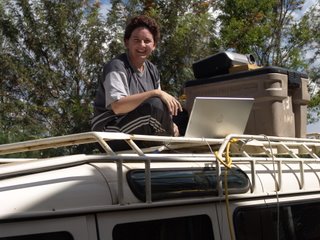 I had to have something high to put the computer and projector on, so my car doubled as a desk. I started painting at 4 and was done around 5:30. Then cleaned up, had a quick bite to eat at David's home and hit the road by 6:30.
Visit my Flickr page to see pictures of me balancing on the scaffolding as well as of the final product.

I really don't like driving at night. Pedestrians blend in with the night, and there are many, many pedestrians in Kenya. Cyclists aren't visible till you're just yards behind them. And matatus often don't dim their headlights. But I didn't want to spend another night at Kipkaren.

I love being at Kipkaren. I love the people. I love the fact that the stars there are 10 times brighter than out here because they don't have electricity yet. I love that you wake up to the sound of the river and weaver birds.

But knew that if I only left in the morning, I'd be home by around 10 at the earliest, and I really, really need to be home early. LOTS needs to get done tomorrow. I'd better get to bed so I'm refreshed in the morning, ready to work hard.

Lala salama!
Posted by Adele around 1:56 AM